Irish soldiers who fought for Mexico in Mexican-American war honoured 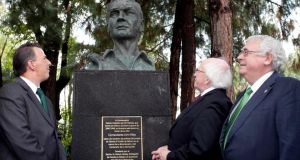 President Michael D Higgins paid tribute at a ceremony in Mexico City to Irish soldiers who fought for Mexico with the famous St Patrick’s Battalion in the Mexican-American war of 1846-48.

Laying a wreath at a plaque commemorating the men at the Plaza San Angel, Mr Higgins noted the Irish names of Hanly, Delaney, Kelly, Murphy and Dalton listed on the inscription who were overrun by the US army in August 1847 as they tried to protect the convent of Churubusco. “It is very poignant to be gathered here this morning to pay our respects to this gallant group, themselves in many ways the descendants of an earlier scattering of Irish men across the armies of Europe and its empires,” Mr Higgins told several hundred people at a ceremony.

Catholic Mexico
Escaping religious discrimination in the US and siding with Catholic Mexico in the war, the Irish soldiers fled south to fight in the Batallón de San Patricio under Capt John Riley from Clifden in Co Galway, who is remembered with a bust erected in his honour in the plaza.

The Americans hanged and shot about 50 soldiers from the battalion as traitors in September 1847, while Riley was flogged and had the letter ‘D’ for deserter scored into his cheeks. “The San Patricios were reviled and cruelly punished by one side in the conflict, but cherished and remembered by the other,” said Mr Higgins.

The identification of the Irish soldiers with the Mexican cause has created “an unbreakable link between our two countries”, he said.

Mexico’s foreign minister José Antonio Meade referred to “los San Patricios” as “these Irish heroes that Ireland has given to Mexico”.