Pope Francis denounces ‘tragedy’ of forced migration to US 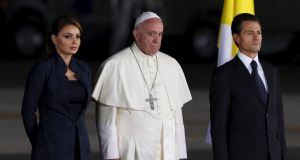 Pope Francis ended his five-day visit to Mexico with a message of love and compassion for its people and the migrants who pass through it on their way to the United States.

For their political and religious leaders, the trip was more a lesson in tough love, as the pontiff criticised Mexico’s ruling class for failing to protect people from predatory criminal gangs and rampant corruption.

He also told bishops to get closer to their flock and ease their suffering, and visited some of the country’s poorest and most violent areas to shine a spotlight on residents’ harsh reality.

The final day was the most symbolic and politically bold moment of the trip, with hundreds of thousands gathering for mass at a Ciudad Juarez fairground.

Meanwhile an estimated 30,000 more watched via simulcast at a football stadium across the Rio Grande in El Paso, Texas.

Francis also aimed a message north of the border at a time of increasingly tough presidential campaign rhetoric on immigration in the US.

The pope appealed for governments to open their hearts to the “human tragedy” of forced migration, imploring: “No more death! No more exploitation!”

Francis stopped short of calling outright for the US to open its borders, but he urged recognition that the multitudes fleeing gangland killings and extortion in their homelands are victims.

“We cannot deny the humanitarian crisis which in recent years has meant the migration of thousands of people, whether by train or highway or on foot, crossing hundreds of kilometres through mountains, deserts and inhospitable zones,” he said.

“They are our brothers and sisters, who are being expelled by poverty and violence, drug trafficking and organised crime.”

Before the mass, Francis paused at the border for a silent prayer in memory of migrants who died trying to reach the US.

He also blessed several hundred migrants sitting on the other side of the fence.

It was the most poignant moment of his trip, but he began to turn heads even before his plane touched down in Mexico.

Flying in from the Vatican on Friday, he first landed in Havana for a historic meeting and embrace with Patriarch Kirill of the Russian Orthodox Church, the first such encounter since the schism that divided Christianity a millennium ago.