Demonstrations are biggest to sweep Brazil in more than two decades 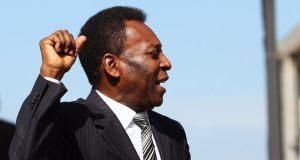 Brazilian soccer great Pele has called on thousands of protesters demonstrating over poor quality public services and corruption to leave the streets and focus on football - an appeal that was quickly met with derision on social media.

Brazil is currently hosting the Confederations Cup, a tournament seen as a dry-run before it hosts the World Cup next year - expected to draw an estimated 600,000 visitors to the country.

“Let’s forget all this commotion happening in Brazil, all these protests, and let’s remember how the Brazilian squad is our country and our blood,” Pele said in a brief broadcast via the O Globo TV network, which was also posted online.

Brazil’s two biggest cities agreed yesterday to revoke an increase in public transportation fares that set off demonstrations that have grown into nationwide protests against poor public services, inflation and corruption.

The decisions, made separately in Sao Paulo and Rio de Janeiro, followed another day of protests across Brazil, which also included a march by demonstrators around a major international soccer game in the northeastern city of Fortaleza.

This month’s transport fare hikes, which came as Brazil struggles with annual inflation of 6.5 per cent, stirred a groundswell of other complaints, leading to the biggest protests to sweep Brazil in more than two decades.

The protests have been organised by a disparate group of activists who have rallied supporters via social media.

While revered by soccer fans the world over, Pele’s image has been tarnished at home by a string of perceived clumsy comments over the years, once prompting former Brazilian strike Romario to famously comment that “Pele when silent is a poet”.

Social media users were less than complimentary about his latest comments, many saying the Brazil great’s wealth meant he knew little of how ordinary Brazilians lived.

“Now Pele takes it upon himself to record a video telling the population to forget this commotion and back the squad. The national squad, FIFA, the stadiums costing millions, go to hell,” one Brazilian posted on her Facebook page.

“Go to the hospitals, take a bus with no security, then I want to see if you keep saying stupid things,” wrote another in response to an online local media report on his remarks.

“Pele, your ignorance is in proportion with your footballing genius,” wrote another poster.

Another former Brazilian icon Ronaldo was also mocked this week after commenting that “you can’t hold a World Cup with hospitals” in response to protests over the billions spent on stadiums that many Brazilians say would have been better invested in public amenities.