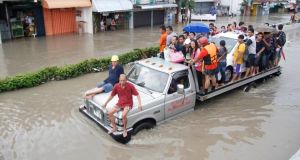 Stranded commuters ride on a truck as they move through floodwaters in Las Pinas city, south of Manila. Photograph: Reuters

Vulnerable coastal cities could suffer a nine-fold increase in losses from flooding over the next 40 years due to a combination of climate change, rapid population increases, economic growth and land subsidence, according to a new report.

The report, commissioned by the Organisation for Economic Co-operation and development (OECD), estimates that average global flood losses of €4.5 billion a year in 2005 could rise to €39 billion by 2050 with projected socio-economic change alone.

Future Flood Losses in Major Coastal Cities, published in Nature Climate Change, examines 136 of the world’s largest coastal cities as part of an ongoing OECD project to explore the policy implications of flood risks due to climate change and economic development.

The cities most at risk, as measured by annual average losses due to floods, include Miami, New York, New Orleans, Boston and Tampa-St Petersburg in the US, Guangzhou and Shenzen in China, Mumbai in India, Nagoya and Osaka-Kobe in Japan and Vancouver in Canada.

Due to their high wealth and low protection, three American cities – Miami, New York and New Orleans – account for 31 per cent of the losses across all 136 cities. Adding Guangzhou, the four top cities account for 43 per cent of global losses (as of 2005).

However, if measured in terms of annual losses as a proportion of a city’s wealth, the most vulnerable would be Guangzhou, Guayaquil in Ecuador, Ho Chi Minh City (formerly Saigon) in Vietnam and Abidjan, capital of Côte d’Ivoire (Ivory Coast). Dublin was not included.

Sea levels
To estimate the impact of future climate change, the study assumed that average sea level will rise 0.2-0.4 metres by 2050 – roughly in line with projections by the UN’s Intergovernmental Panel on Climate Change.

Because flood defences have been designed for past conditions rather than future-proofing, the study found that even a moderate rise in sea level would lead to soaring losses of more than $1 trillion (€750 billion) in the absence of adaptation.

“Inaction is not an option,” it says. “Coastal cities will have to improve their flood management, including better defences, at a cost estimated around $50 billion [€37.5 billion] per year for the 136 cities”.

To help cities deal with disasters when they do hit, the study recommends that policymakers should consider early warning systems, evacuation planning, more resilient infrastructure and financial support to rebuild economies.