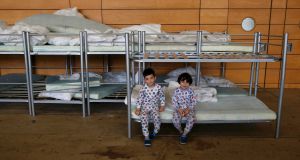 Migrant children from Iraq in a sports hall at Jane-Addams high school, which has been transformed into a refugee shelter, in Berlin’s Hohenschoenhausen district, Germany, February 2nd, 2016 Photograph: Fabrizio Bensch/Reuters

There are more children and women on the move than adult males for the first time since the start of the European refugee and migrant crisis, according to Unicef.

Nearly 60 per cent of refugees and migrants crossing the border from Greece to Gevgelija in the Former Yugoslav Republic of Macedonia are now made up of children and women, while 36 per cent of those crossing the sea between Greece and Turkey are children.

Unicef has warned the actual figure could be higher, as many children do not declare their age until they reach their destination.

While the exact number of unaccompanied and separated children on the move is not known, 35,400 have sought asylum in Sweden, while there are more than 60,000 unaccompanied adolescents in Germany who originated mainly from Syria, Afghanistan and Iraq.

‘More are at risk’

Marie Pierre Poirier from Unicef warned the surge in numbers of children and women on the move means “more are at risk at sea, especially now in the winter, and more need protection on land”.

“Welfare, protection and health systems need to be strengthened at every step of the way so children and women are not exploited or fall between cracks,” Ms Poirier said.

Unicef has underlined that all child refugees and migrants must be fully informed of their rights to claim asylum and to reunify their family in Europe.

Meanwhile, Amnesty International has warned that women refugees in Lebanon are increasingly at risk of exploitation and abuse.

In a new report entitled I Want a Safe Place, Amnesty has highlighted how the Lebanese government’s refusal to renew residency permits and a shortage of international funding is leaving refugee women in a “precarious position”.

“The combination of a significant shortage in international funding for the refugee crisis and strict restrictions imposed on refugees by the Lebanese authorities, is fuelling a climate in which refugee women from Syria are at risk of harassment and exploitation and are unable to seek protection from the authorities,” director of Amnesty International Ireland Colm O’Gorman said.

“The large number of refugees has placed a considerable strain on Lebanon, but this is no excuse for the harsh restrictions the authorities have imposed on refugees which are putting them in danger.”

Lebanon, which has more refugees per capita than any other country in the world, introduced regulations in 2015 to make it more difficult for refugees to renew their residency status. Without proper legal status, refugees face arbitrary arrest, detention and deportation.