Mirth and disbelief in Mexico at recapture of El Chapo 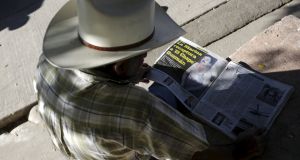 A resident reads a newspaper article about the recapture of Joaquin “El Chapo” Guzmán at a plaza in the municipality of Badiraguato, in Sinaloa state, Mexico. Photograph: Daniel Becerril/Reuters

Pinning down the meaning of Joaquín Guzmán Loera – the deadly and celebrated Mexican drug trafficker known as El Chapo – is a constant battle between tragedy and farce. Just as the government managed to recapture the fugitive crime boss, whose brutality and corruption of public officials kept him free for years, here came the circus: the revelation that he granted an interview to the actor Sean Penn and planned a movie about himself while still a fugitive.

All of that has been fodder for front pages across the country. And the complex mixture of mirth, disbelief and disappointment it has been met with here is a reflection of divisions among Mexicans themselves. Many, though, seemed to take it as further justification for an abiding cynicism toward the government and its ability to combat drug traffickers that all too often seem not only above the law, but also stranger than fiction. Despair found its outlet in humour. Social media brimmed with jokes about the capture and the interview, including a derogatory hashtag using Penn’s name in Spanish.

But widespread support for Guzmán’s extradition to the United States, after years of governmental resistance to the move, was an acknowledgment of continued concern about government corruption and weakness.

“It draws the frivolous interest of many people, the story by Sean Penn,” said Enrique Krauze, a prominent historian in Mexico. “But the main point is that we have an immense problem with drugs and crime in Mexico, with impunity and with the lack of the rule of law in the criminal system.”

“The underlying thing is – here is El Chapo, but what about the other protagonists of Mexican impunity and violence, the politicians and police forces that for decades have been their allies and partners?” he added.

The government has struggled to assert itself through the wave of celebrity fascination and chaos that sprang up after news of Guzmán’s arrest. The accounts by officials left many details unclear. Conflicting reports, about who knew what when, and what intelligence led to the raid that took down Guzmán, have emerged. Having placed Guzmán back in the same prison he escaped from in July, the government did release a statement assuring the public he would be well guarded this time.

Some news media reports claimed that Penn and the actress who helped orchestrate the interview were under investigation, without specifying anything further. Penn’s turn as a journalist prompted hard feelings among those who recalled all too well how many Mexican reporters have died covering the drug war.

To some, Penn’s account felt less like journalism than mythmaking, an extension of the Hollywood machine that Guzmán seemed eager to leverage. Both the capture and the ensuing publication of the interview have fed the persistent international image of Mexico as a nation hopelessly trapped in the vicious tides of a drug war. The kingpins, with their resources, egos and catchy nicknames, never fail to capture the imagination of the world.

That all comes as bad news to people who have been remaking Mexico as something different: a country with an improving economy, a burgeoning centre for culture and tourism, and a more responsive government. The theatrics also distracted from the nation’s real and persistent problems. Analysts asked why, if the government could hunt down El Chapo, it could not locate 43 students who disappeared from a teachers college in Guerrero state. Or why it could not halt the peso’s slide against the dollar, down nearly 20 per cent in the last year.

“Instead of focusing on one person and placing all this attention and effort on one guy, they should focus on more relevant issues like education,” said Jose Fuentes López (22), who waits tables at a coffee shop in Monterrey. But he, too, saw the theatre in it all. “When you see this criminal being interviewed by a world-class actor you know something is not right, because everything is like a show,” he added. “He is a criminal, nothing else.”

As much as many here would like to turn their back on El Chapo and what he represents, they cannot. Too many others still find him compelling. In his home state of Sinaloa, for example, there was no sense of triumph in the arrest of a man many viewed as a native son. Feelings of shock gave way to worry. Who would come next? Would the transition be violent?

“We were perfectly comfortable when El Chapo was here,” said a 16-year-old named Elvira, visiting a coffee shop in the city of Los Mochis, where Guzmán was captured. “Now we are worried someone else is going to come here and try to fill his spot.”

For many Mexicans, their government is an institution not to be trusted, and watching Guzmán consistently outsmart it was a favoured pastime. Like elsewhere, people love an outlaw. and Guzmán gave them a lot to love. He also gave Mexico much to fear.

“Of the 120,000 people dead in the past decade, half come from the wars that the Sinaloa cartel opened,” said Hector de Mauleon, a Mexican journalist and author. Beyond the death toll, the cartels remain corrupting forces that exert control over every level of government. But unlike the government, which changes hands and switches players regularly, the cartels are far more permanent, de Mauleon said.

In response to this, many Mexicans appear to have adopted a darkly comic way to vent their frustrations. And nowhere was that reaction more apparent than on social media. Within minutes of his capture, comic memes began to emerge. One depicted two stick figures walking with a third, a rendering of the arrest. Another placed Guzmán’s head on a background dancer with the lyrics to a Justin Bieber song, asking whether it was too late to say sorry. And shortly after the interview was published on Saturday night, Mexicans came up with the hashtag #NoSeanPenndejos, a play on the actor’s name that, roughly translated, means don’t be a jerk.

“I don’t think you can describe Mexico without describing this fatalistic humour,” said Jennifer Clement, a novelist and president of PEN International who grew up in Mexico. “If you can laugh at what hurts, it doesn’t hurt so much.”