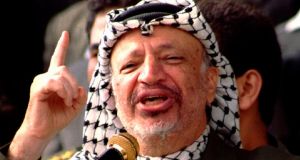 Palestinians have blamed Israel for the death of Yasser Arafat after Swiss forensic tests confirmed that he was poisoned to death in 2004 with radioactive polonium.

Mr Arafat’s widow, Suha, after receiving the test results yesterday, said her husband was the victim of a political assassination.

“It is scientifically proved that he didn’t die a natural death and we have scientific proof that he was killed.”

Yasser Arafat had many enemies, including Palestinian and Arab rivals, but Wasel Abu Yousef, a member of the executive committee of the Palestine Liberation Organisation, yesterday pointed the finger of blame at Israel.

“President Arafat was the victim of an organised terrorist assassination perpetrated by Israel, which was looking to get rid of him.”

Israeli officials have categorically denied any involvement in Mr Arafat’s death, even though Israeli forces had surrounded his Ramallah Muqata headquarters for the 2½ years before he was flown to a French hospital where he died in November, 2004, aged 75, after falling into a coma.

He said it was part of the ongoing battle between Mr Arafat’s widow and the Palestinian Authority.

Yesterday’s findings could be politically embarrassing with Israeli and Palestinian negotiators engaged in US-sponsored peace talks aimed at clinching a peace deal next year.

Last November international experts took samples from Mr Arafat’s body in an effort to determine the cause of his death, amidst persistent rumours of foul play.

British forensic scientist Professor David Barclay said yesterday’s results merely confirmed earlier test results, and that the type of polonium could only have come from a nuclear reactor.

“What we have got is the smoking gun – the thing that caused his illness and was given to him with malice.”

Arafat signed the 1993 Oslo interim peace accords with Israel and led a subsequent uprising after the failure of talks in 2000 on a comprehensive agreement.

Allegations of foul play surfaced immediately. Arafat had foes among his own people, but many Palestinians pointed the finger at Israel.

An investigation by the Qatar-based Al Jazeera television news channel first reported last year that traces of polonium-210 were found on personal effects of Arafat given to his widow by the French military hospital where he died.

That led French prosecutors to open an investigation for suspected murder in August 2012 at the request of Suha Arafat. Forensic experts from Switzerland, Russia and France all took samples from his corpse for testing after the Palestinian Authority agreed to open his mausoleum.

The head of the Russian forensics institute, Vladimir Uiba, was quoted by the Interfax news agency last month as saying no trace of polonium had been found on the body specimens examined in Moscow, but his Federal Medico-Biological Agency later denied he had made any official comment on its findings.

The French pathologists have not reported their conclusions publicly, nor have their findings been shared with Suha Arafat’s legal team. A spokeswoman for the French prosecutor’s office said the investigating magistrates had received no expert reports so far.

One of her lawyers said the Swiss institute’s report, commissioned by Al Jazeera, would be translated from English into French and handed over to the three magistrates in the Paris suburb of Nanterre who are investigating the case.

The same radioactive substance was slipped into a cup of tea in a London hotel to kill defecting Russian spy Alexander Litvinenko in 2006. From his deathbed, Mr Litvinenko accused Russian president Vladimir Putin of ordering his murder.

The British government refused to hold a public inquiry into his death after ministers withheld some material which could have shed light on Russia’s suspected involvement.

Prof Barclay said the type of polonium discovered in Arafat’s body must have been manufactured in a nuclear reactor.

While many countries could have been the source, someone in Arafat’s immediate entourage must have slipped a miniscule dose of the deadly isotope probably as a powder into his drink, food, eye drops or toothpaste, he said.

Arafat fell ill in October 2004, displaying symptoms of acute gastroenteritis with diarrhoea and vomiting. At first Palestinian officials said he was suffering from influenza.

He was flown to Paris in a French government plane but fell into a coma shortly after his arrival at the Percy military hospital in the suburb of Clamart, where he died on November 11th.

The official cause of death was a massive stroke but French doctors said at the time they were unable to determine the origin of his illness. No autopsy was carried out.

Prof Barclay said no one would have thought to look for polonium as a possible poison until the Litvinenko case, which occurred two years after Arafat’s death.

Some experts have questioned whether Arafat could have died of polonium poisoning, pointing to a brief recovery during his illness that they said was not consistent with radioactive exposure. They also noted he did not lose all his hair. But Barclay said neither fact was inconsistent with the findings.

Since polonium loses 50 per cent of its radioactivity every four months, the traces in Arafat’s corpse would have faded so far as to have become untraceable if the tests had been conducted a couple of years later, the scientist said.

“A tiny amount of polonium the size of a flake of dandruff would be enough to kill 50 people if it was dissolved in water and they drank it,” he added.