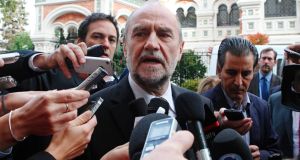 It is quite an experience to listen to an Israeli, an Iranian, an Egyptian and a Finn discuss nuclear non-proliferation and disarmament efforts in the Middle East. This striking combination was recently brought together by the EU Non-Proliferation Consortium as just one panel within a much larger annual conference.

The conference spanned two days, bringing together more than 300 diplomats, academics, think-tankers and NGO and civil society representatives. The consortium is a network of more than 60 European think tanks centred on institutions in Frankfurt, London, Paris, and Stockholm. It was set up, and is paid for, by the European Union. Since the consortium got under way in 2011, it has funded two large international conferences, smaller thematic expert meetings and a website (nonproliferation.eu) which acts as a showcase for the consortium’s reports on disarmament topics.

Absence of trust
The panel on the Middle East highlighted everything that is problematic about non-proliferation and disarmament negotiations: contested definitions; the absence of trust; confusion and misrepresentation over goals; and the tangled web of interlinked threats and insecurities. The first of these – contested definitions – was immediately evident with respect to the Iranian nuclear programme. For the Iranians, their programme is about creating the potential for a nuclear energy industry free of foreign control.

For much of the rest of the world, the technical specifications of the Iranian programme speak unequivocally to the creation of a nuclear weapons capacity – or a critical “break-out” capacity which would allow for the swift construction of such weapons.

Of course the absence of trust and confidence was a theme in panel discussions and subsequent questions and answers. While none bar the Finnish minister were “official” government representatives, each clearly spoke from an intimate knowledge of, and support for, their respective government’s position.

The seating arrangement, which placed the Iranian and Israeli contributors side by side, created a visible line of high pressure. That pressure peaked when the Iranian academic – addressing “double standards” – asked of his Israeli counterpart why Israel should be treated differently. This provoked the reply that, first, Israel had never signed and therefore could not be bound by nuclear non-proliferation treaties and that, second, Israel – uniquely in the region – had neighbours bent on its destruction. Trust, it was insisted, had to be earned and verified.

Confusion over goals and intentions was also evident. Why is it that some states continue to seek a nuclear, chemical or biological weapons capacity? Is it the fear of what others might do? Is it a rational strategic decision when faced with a much larger potential enemy? Is it bound up with issues of national prestige or even the survival of the political regime in power?

When there is such ambiguity over the motivation of states, it is doubly difficult to create a framework which would create incentives for states to rid themselves of such nuclear ambition or capacity.

It is perhaps the last challenge – interwoven threats and insecurities – that is perhaps the greatest facing those that strive to prevent the proliferation of weapons and to promote global disarmament. To what extent are weapons the symptom or the cause of insecurity – or are they both?

For the Israeli panellist – a former general and now think-tanker – the issue of disarmament in the Middle East could never be divorced from wider regional security concerns. In practical terms, how can you even negotiate with those who deny your very existence or who call for your elimination from the face of the Earth? Similarly, however, how can a regional peace be established when one or more parties possess or seek to possess weapons of mass destruction and who then insist on a policy of “constructive ambiguity”, refusing even to acknowledge the reality of the weapons they are building?

Well-funded initiatives such as the consortium on non-proliferation and disarmament serve also to feed the EU’s self-conceit that it is an international actor which is different to states and which pursues loftier and more ethical goals. There are tangible benefits of such a profile, with Catherine Ashton – the EU’s ersatz foreign minister – leading the negotiations with Iran on its nuclear programme to some good effect. The nub of the issue, however, remains and is graphically illustrated in the Middle East panel discussion.

The world wishes to rid itself of weapons, but just not yet.

Prof Ben Tonra is head of the UCD school of politics and international relations. He was a guest of the EU Non-Proliferation Consortium’s annual conference in Brussels recently