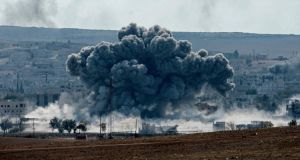 A file image of an explosion that occurred after an apparent US-led coalition airstrike on Islamic State targets near Kobani in Syria last week. Photograph: Erdem Sahin/EPA.

A US-led coalition set up to fight Islamic State has bombed the al-Qaeda-linked Nusra Front and another radical faction in northwest Syria.

The Syrian Observatory for Human Rights, a monitoring group, said a series of air strikes had targeted Nusra Front, including in Idlib province in northwest Syria, where last week the organisation routed Western-backed Syrian rebels.

One strike on a base near the northern city of Aleppo killed at least six Nusra fighters, the Observatory said, adding that the hardline Islamist group Ahrar al-Sham was also hit overnight.

It was the second time the Nusra Front, long one of the most effective groups battling Syrian president Bashar al-Assad, had been hit in the US-led air campaign, which was launched to “degrade and destroy” Islamic State - a separate hardline Islamist group that has clashed with the al-Qaeda affiliate.

Several commanders are believed to have been killed in the original strikes against Nusra in September, including Kuwaiti-born Mohsin al-Fadhli - also known as Abu Asmaa al-Jazrawi - reputedly a former member of Osama bin Laden’s inner circle.

Residents today said one of the air strikes targeted a car used by Nusra commanders, near an internet cafe in the Nusra-controlled town of Sarmada, close to the Turkish border.

A rebel from another Western-backed group operating in northern Syria confirmed the air strikes on the Nusra Front and on Ahrar al-Sham, and said they took place at around 1 am.

“The strength of strikes and their accuracy confirms that they were carried out by the alliance,” the rebel said, speaking on condition of anonymity. The Nusra Front vehicle struck in the attack had been carrying ammunition, he said.

In neighbouring Harem, residents said at least four children had been killed and dozens injured in an attack they believed was launched by the coalition.

Residents around the rebel-held Bab al-Hawa border crossing, a strategic gateway to Turkey, said a missile flattened the headquarters of Ahrar al-Sham nearby and killed Abu al-Nasr, the head of the group’s arms procurement division.

Nusra, which has been trying with allies to remove its name from the UN terrorist list, was taken by surprise when coalition warplanes bombed several of its positions during the initial strikes in September.

Last week the group seized control of areas of Idlib province from Western-backed rebel leader Jamal Maarouf, head of the Syria Revolutionaries’ Front in northern Syria, confiscating its weapons. It also took positions from the Hazzm Movement, another recipient of Arab and Western support.

The United States is planning to expand military support to what it describes as the moderate opposition to Dr Assad as part of its strategy against Islamic State in Syria.

Nusra Front was once seen as the strongest insurgent group in Syria but has been eclipsed by Islamic State, which broke with al-Qaeda early this year and has seized wide areas of Syria and Iraq.