US journalist among four prisoners freed by Iran 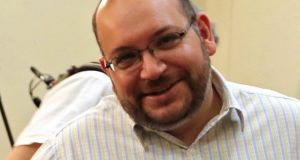 Iran has freed four dual-nationality prisoners, one of whom is Washington Post reporter Jason Rezaian, Iranian state television has announced.

A member of the Iranian judiciary confirmed that one was Mr Rezaian, a dual Iran-US citizen who was convicted of espionage in a closed-door trial last year.

Washington Post spokeswoman Kris Coratti could not initially confirm if her colleague had been released.

The agency also quoted a statement from the Tehran prosecutor’s office as saying the inmates were freed “within the framework of exchanging prisoners”.

The agency said the US would also release seven Iranian nationals from jail as part of a prisoner swap.

US officials would not immediately confirm the announcement, but they had indicated a prisoner deal would be separate from the expected “implementation” of a landmark nuclear agreement with Tehran.

Iranian foreign minister Mohammad Javad Zarif, who is in Vienna to meet US secretary of state John Kerry, spoke in cryptic terms of a possible negotiation.

The family of one of the US prisoners is believed to have received unofficial word from Iran that their relative is being released.

Iran is seeking a number of detained Iranians in exchange for the US citizens.

Mr Rezaian was born in California and holds both US and Iranian citizenship. He was convicted in closed proceedings last year after being charged with espionage and related allegations. The length of his sentence has not been disclosed publicly. The Washington Post and the US government have denied the accusations, as has Mr Rezaian. He was originally detained with his wife in July 2014. She was released on bail in October 2014. Rezaian was the newspaper’s Tehran correspondent and was accredited to work in the country by the Iranian government.

Mr Hekmati of Flint, Michigan, is a former US Marine. He was detained in August 2011 on espionage charges. His family says he has lost significant weight and has trouble breathing, raising fears he could contract tuberculosis. Mr Hekmati went to Iran to visit family and spend time with his ailing grandmother. After his arrest, his family said they were told to keep matter quiet. He was sentenced to death in 2012. After a higher court ordered a retrial, he was sentenced in 2014 to 10 years.