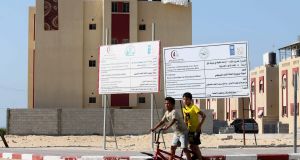 The United Nations Development Programme (UNDP) says it is “greatly concerned” by Israeli allegations that one of its staffers helped Hamas in Gaza, promising in a statement “a thorough internal review of the processes and circumstances surrounding the allegation”.

The indictment in an Israeli civilian court on Tuesday against Waheed Al Bursh, an engineer who has worked for UNDP since 2003, followed charges last week against a Palestinian employee of the World Vision charity in Gaza, saying he had funnelled millions of euro to Hamas.

Israel claims Mr Bursh (38), who was arrested last month, allegedly confessed to diverting rubble from a UNDP project in Gaza to a Hamas operation to build a jetty for its naval force.

The Israel Security Agency, the Shin Bet, said in a statement that Mr Bursh had also persuaded his managers to prioritise the rebuilding of homes damaged in the Gaza war in an area “populated by Hamas members”, and had notified Hamas when UN workers removing rubble uncovered openings to Hamas tunnels and weapon-storage rooms so they could take control of the sites.

The UNDP has spearheaded the massive reconstruction project in Gaza after 11,000 homes were destroyed in the Gaza war two years ago.

Hamas labelled the allegations “incorrect and baseless”. Mahmoud Zahar, a Hamas leader in Gaza, said the group did “not rely on employees of international aid organisations for any needs of the resistance”.

Hamas has suffered a severe financial crisis since the fall of Egyptian president Mohamed Morsi and the sealing of tunnels between Gaza and Egyptian Sinai, combined with the end of Iranian funding. Israeli intelligence believes the organisation seeks to gain control of international aid organisations in Gaza, which funnel millions of euro in aid to the impoverished area each year.

Australia and Germany have suspended funding to World Vision in Gaza after the arrest by Israel of the organisation’s Gaza director Mohammad El Halabi, who was accused by Israel of transferring €6.4 million a year to Hamas over five years. The agency says this is roughly 60 per cent of World Vision’s total Gaza budget.

World Vision has stopped its Gaza operations while it investigates the claims, but challenged the Israeli allegations.

“There is a huge gap in these numbers the Israeli government is telling and what we know,” World Vision Germany spokeswoman Silvia Holten said.

According to the ISA, Mr El Halabi crafted an elaborate scheme to funnel funds, food, medical supplies and agricultural equipment to Hamas. He fraudulently listed the children of Hamas operatives as wounded, created straw organisations, and inflated project costs to divert cash. Building supplies intended to support farming projects were transferred to Hamas for constructing tunnels and military installations, according to Israel.

Robert Piper, the UN co-ordinator for aid in the Palestinian territories, called for a fair and transparent trial, saying that the allegations against Mr El-Halabi “raise serious concerns” for aid groups in Gaza.