Turkey attacks PKK and IS targets in Iraq and Syria 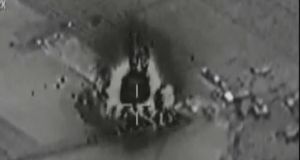 An image showing one of the strikes by Turkish fighter jets on targets in Syria on Friday. Photograph: Getty 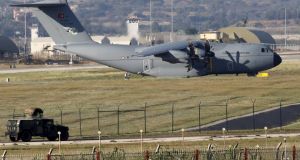 A Turkish Air Force transport aircraft is parked at Incirlik airbase in the southern city of Adana. Turkey has agreed to allow US planes to launch air strikes against Islamic State militants from the US air base at Incirlik, close to the Syrian border, US defence officials said. Photograph: Reuters 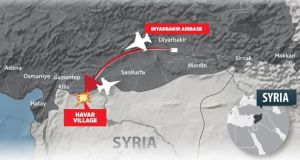 The strikes against PKK targets are likely to be a major blow to the stalled Kurdish peace process.

Turkey launched its first-ever air attack against Islamic State targets in Syria early on Friday, promising more decisive action against both the jihadists and Kurdish militants.

The security operations will continue for as long as it faces a threat, Prime Minister Ahmet Davutoglu said on Saturday.

“These operations are not ‘one-point operations’ and will continue as long as there is a threat against Turkey,” Davutoglu said at a news conference in Ankara, before heading to Istanbul, where he is due to meet with President Tayyip Erdogan and the head of the army on Saturday afternoon.

The outlawed PKK, deemed a terrorist organisation by Ankara and Washington, has waged a three-decade insurgency against Turkey for greater Kurdish autonomy.

Turkey stepped up its role in the US-led coalition against the militant group Islamic State on Friday. As well as launching its first air strikes against the hardliners in Syria, it promised to open up its air bases to the United States.

Police also detained more than 300 suspected Islamic State and PKK members in a police crack down on Friday, Mr Davutoglu said after vowing to fight all “terrorist groups” equally.

Turkey’s more active role comes after a suspected Islamic State suicide bomber killed 32 people, some of them Kurds, this week in the border town of Suruc. That touched off a wave of violence in the mainly Kurdish southeast, with the PKK killing at least two police officers, calling it retaliation for the suicide bombing.

Many Kurds and opposition supporters have suspected Turkish president Tayyip Erdogan and the ruling AK Party of covertly backing Islamic State against Kurdish fighters in Syria, something the government has repeatedly denied.

Erdogan took a big political risk in starting peace talks in 2012 with the Kurds, who represent nearly 20 per cent of Turkey’s population, but they now blame him for backtracking on promises.

On Friday, Erdogan said he had told US President Barack Obama that the PKK, which he calls a separatist organisation, would be a focus for attacks.