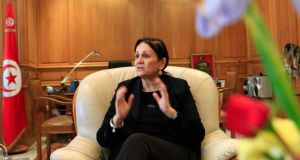 Tunisia’s culture minister Latifa Lakhdar followed the two-hour siege of the Bardo Museum in Tunis – in which 20 foreign tourists and a policeman were killed – from a “crisis cell” in her office.

There were 300 tourists inside the museum at the time of the attack last Wednesday.

“The terrorists pursued them through the museum and shot them at close range. There were whole rooms full of carnage,” Ms Lakhdar recalls with a shiver.

“If it had not been for the anti-terrorist brigade, far more would have been killed.”

The minister described how they were talking to museum employees who had barricaded themselves into the library with two dozen tourists.

“Someone was trying to get in, and they were panicked. We agreed on a password which we gave to police, so they let the police in.”

The gunmen Hatem Khachnaoui (20) and Yassine Laabidi (27) wore high explosives belts. and Ms Lakhdar says: “They intended to blow up the museum. The security forces knew they might be wearing belts, so they targeted other parts of their bodies.”

The museum was not damaged during the attack. CCTV from inside the museum shows the two assailants speaking briefly to a man leaving the museum as they rush up the stairs.

He may be Maher Ben Mouldi Kaidi, a friend of Laabidi who disappeared on the day of the massacre – and who is still sought by police.

There were, Ms Lakhdar admits, “security lapses” and prime minister Habib Essid yesterday sacked the police chiefs of Tunis and the Bardo Museum. The tourist attraction is to reopen today.

Tens of thousands of foreigners who have come to Tunis for the anti-globalisation movement’s World Social Forum will walk from the 14th century city gate, Bab Saadoun, to the Bardo, in memory of the victims of last week’s attack.

The Tunis symphony orchestra will play music from their homelands, and the Tunisian government has invited all their governments to send representatives.

Ms Lakhdar defines a museum as “a place of memory and a place of absence, because those who built these civilisations are no longer with us”.

With the memorial stele, she adds: “The victims of the attack will become part of the eternity of absence in the museum.”

The Bardo Museum traces the history of Tunisia from pre-historic times through every civilisation that inhabited the country – Carthaginians, Romans, Byzantines, Arab Muslims and Ottomans, who became “Tunisianised”.

Ms Lakhdar is a university history professor who specialises in Islamic thought. Fundamentalists Muslims discount all history before the late 6th – early 7th century life of the Prophet Mohamed, she says.

“They don’t recognise human creativity, because only God can create. It’s the same ideology as in the middle ages: that man is a sinner whose sole purpose is to beg for salvation. For them, all this beauty and culture is pagan.”

Fundamentalists destroyed ancient statues and monuments in Afghanistan and Iraq, Ms Lakhdar notes. “But this is the first time they attacked human beings in a museum.”

Extremists were known to be hiding in mountains along the Algerian border, “but this is the first time they have come into the capital,” she says. “It’s even more painful that this massacre occurred in a place of culture.”

“It is a jewel, a source of national pride ... Islam generated a great world civilisation from the 8th until the 12th century.

“It was an open civilisation that took inspiration from the Persians and Byzantines. It produced great thinkers like Avicenna and Averroes. At the Beit al-Hikma (House of Wisdom) in Baghdad, scholars from around the world attempted to translate all knowledge into Arabic.”

She said the merchant bourgeoisie “were great patrons of medicine, the arts and philosophy”. However, this declined in the 11th century.

Today’s Salafists are heirs to the puritanical Hanbalites, the precursors of Wahabism, Ms Lakhdar says. The Hanbalites often attacked Shia Muslims, as well as fellow Sunnis, whom they accused of sinning.

Abu Bakr al-Baghdadi, the leader of Islamic State, which carried out last week’s massacre, named himself after the first Abbasid caliph.

But the caliphate was always a political entity which followed the Byzantine, Cesaro-papist model, Ms Lakhdar says.

“The state put religion under its authority; not the other way around. The jihadist idea that religion should rule politics is a model that never existed.”