The Irish-Egyptian Halawa siblings became increasingly politicised during a summer holiday in Egypt, and have now been detained by the regime they protested against. But friends say they are innocent victims of a political power struggle 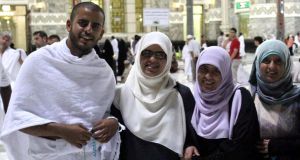 In a security facility somewhere in Cairo, four siblings from Ireland await their fate after they were detained during unrest in Cairo last weekend. They have been allowed no contact with their family or lawyer.

Hours after an Irish diplomat was granted access to them on Tuesday, reports emerged in Egypt’s state-run media that four Irish citizens – believed to be sisters Soumaia (27) Fatima (23) and Omaima Halawa (21), and their brother Ebraheem (17) – were among nine foreign nationals detained for up to 15 days pending investigation into charges including attempted murder, possession of arms and explosives, and belonging to a militant group.

The story of how the four Irish citizens ended up in military custody in Cairo began last Friday, the day the Muslim Brotherhood called for rallies against the army’s overthrow of Egypt’s first democratically elected president, the Brotherhood’s Mohammed Morsi, and the bloody security operation to evict his supporters from protest camps in the city.

Sheikh Hussein Halawa, father of the siblings and imam at the Islamic Cultural Centre of Ireland (ICCI) in Clonskeagh, Dublin, says he advised his children to seek refuge in Cairo’s al-Fath mosque after deadly clashes broke out at nearby Ramses Square, where the Halawas had been demonstrating with thousands of others.

Security forces surrounded the mosque, inside which hundreds of people had barricaded themselves. Automatic gunfire and screaming could be heard in the background as the siblings gave dramatic interviews to TV channels including Al Jazeera from inside the mosque, describing scenes of chaos.

“They want to kill us,” said Ebraheem in a clip widely shared by his friends on social media. “We just want things to be like they are in Ireland. Everyone is willing to give themselves to the last bullet.”

The siblings told Al Jazeera that they were too frightened to leave, despite the promise of safe passage by the military, because they had witnessed other women being set upon by a baying anti-Morsi mob, some armed with wooden sticks, as they tried to get out.

A US reporter at the scene said some within the crowd threatened to “get to” a woman who had been doing interviews with Al Jazeera from inside the mosque, a possible reference to the Halawa sisters.

When security forces eventually overran the complex, the Halawas were among scores of people, including several journalists, who were rounded up and taken to Cairo’s infamous Tora prison.

“I saw them at the protests and the mosque. They did nothing wrong,” said Shaimaa Awad, an Egyptian journalist who was detained at Tora with the Halawas but later released. “They told the interrogators that they had Irish nationality and they wanted to contact the Irish Embassy as soon as possible. The man replied: ‘We will see.’”


Demonstrations
As Irish officials try to get further information about the reports that the Halawa siblings may face serious charges, their family and friends in Ireland have been protesting their innocence and highlighting their case through demonstrations outside the Egyptian embassy in Dublin and media campaigns. A “Free the Halawas” Facebook page has been set up, along with a similar Twitter hashtag.

Like many young Irish of Arab extraction, the Halawa siblings were transfixed by the wave of revolutions and uprisings that swept the Middle East and north Africa in early 2011.

The events unfolding in the countries where they or their parents were born triggered a political awakening among Irish-Arab youth that took several forms: some helped found charities and civil society groups, others campaigned online and on the streets, and a small number joined rebel forces fighting in Libya and Syria. Some, like Omaima and Fatima Halawa, both of whom studied digital media in Dublin, were inspired by the citizen journalism of the so-called Arab Spring.

The Halawas arrived in Cairo with their mother in early June, several weeks before Morsi’s ousting, on July 3rd, for their annual family holiday. On July 6th, Omaima posted a photograph on Facebook of herself and Soumaia holding a poster of Morsi at Rabaa al-Adawiya mosque, site of what would eventually become a weeks-long sit-in protest against Morsi’s overthrow before security forces dispersed it with the loss of hundreds of lives.

“They went to Rabaa to witness and record with pictures and video so that people can see that there are no terrorists among the protesters as the Egyptian authorities are claiming,” says Sheikh Halawa.

A number of other Irish citizens of Egyptian extraction had also joined the Rabaa protest in recent weeks, some of them members of the Muslim Brotherhood, which has a strong presence in Ireland. Several had formed a campaign group in Ireland called the Irish Anti-Coup Coalition.

Three weeks ago, the Halawas’ sister Nosayba posted a video on YouTube showing her siblings address the Rabaa crowd against a banner reading “Egyptians Abroad for Democracy”, a lobby group set up by young Egyptian expatriates opposed to Morsi’s ousting and the violent crackdown on his supporters that followed it.

“The Halawas were at Rabaa all day every day,” says Aly Zein, a coordinator for the group, who became friends with the siblings during the sit-in. “Once people got there and saw what was happening, they got swept up in it. The solidarity we felt was inspiring.”


Increasingly impassioned
Omaima’s Facebook posts reveal how she became increasingly impassioned about what was happening as she witnessed security forces attack protesters. On July 25th, she mocked those who claimed the Rabaa encampment was violent: “Woooow all those people protesting for the president’s legitimacy are terrorists including the ones demonstrating in Rabaa oh does that make me also a terrorist???”

Two days later scores of protesters were killed after security forces opened fire. Omaima wrote of how she yearned to join the “martyrs”: “A night full of tears and action yet jealousy towards the [martyrs] how much I envy them and ask Allah to gift me with [martyrdom]. On July 28th, she was more defiant: “I’m still [in Rabaa] and will be until our democracy is back, until our religion is no longer attacked . . . because we only fear Allah not bullets.”

In the days after the violent breaking up of the Rabaa protest, Omaima posted numerous photographs of the dead and injured, writing: “This was the place I met the most amazing people, this was the place that truly made me proud to be an Egyptian... because people’s hearts there are only for the sake of Allah then every single place in Egypt will be Rabaa.”

Aly Zein says he is shocked at the possibility the Halawas may face charges including attempted murder and possession of arms and explosives. “They are peaceful people. Their protests were non-violent. When I heard they were detained, I was sure they would be released soon because they are Irish citizens.”

Sheikh Halawa suspects the accusations against his children and other foreign nationals are politically motivated, given the prickly reaction by the interim Egyptian authorities to international criticism of a crackdown that has claimed the lives of more than 1,000 people since August 14th. “My children are innocent in all of this. They did not do anything,” he says. “This is politics.”

Sheikh Halawa is the secretary of the European Council for Fatwa and Research (ECFR), a group of scholars that issues religious opinions on practical matters specific to Muslims in Europe. It is an offshoot of the Brussels-based Federation of Islamic Organisations in Europe (FIOE), an umbrella group of various branches and affiliates of the Muslim Brotherhood in Europe.

Because of Sheikh Halawa’s role, the ECFR headquarters is at the ICCI in Dublin. The ECFR is chaired by Yusuf al-Qaradawi, a controversial Egyptian-born cleric based in Qatar who is considered a spiritual guide for the Muslim Brotherhood. Qaradawi has strongly denounced Morsi’s removal at the hands of the military and urged all Egyptians to resist it.

Because of these connections, some Muslims here speak of the ICCI as the Ikhwanee mosque, an Arabic language reference to the Muslim Brotherhood, which, since its founding in Egypt in 1928, has grown to become the world’s most influential transnational Islamist movement.

The Brotherhood, which swept Egypt’s first post-Mubarak elections, blends political activism with charitable work in an effort to “Islamicise” society from the bottom up. Morsi’s widely criticised presidency followed by his ousting and the subsequent crackdown on his base has shaken the movement more than at any other point in its history.

The Halawas’ family and friends fear the siblings have now found themselves unwitting players in a potential legal case linked to a much larger drama unfolding in Egypt, one that involves competing narratives fuelled by bitter polarisation between those who supported the military’s overthrow of Morsi and those who opposed it.

“We can’t believe they have gotten caught up in something like this,” said one friend who did not want to be named. “It was mix of bravery and naivete.”