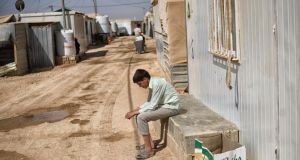 A young Syrian outside his trailer at the Zaatari refugee camp in Jordan. Refugees’ resignation and resilience combine with major infrastructure investments to make the place feel ever more like an entrenched city than a makeshift way station. Photograph: Samuel Aranda/The New York Times 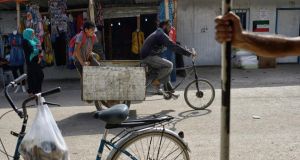 A busy street at the Zaatari refugee camp in Jordan. The 20sq km camp near Jordan’s border with Syria is now in its fourth year, and chaos and desperation have settled into an orderly grind. Photograph: Samuel Aranda/The New York Times 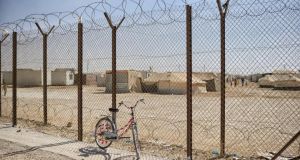 The Zaatari refugee camp in Jordan: The first bicycles started showing up more than a year ago, but the boom came around April with a donation from Amsterdam of 400 broken-down two-wheelers. Photograph: Samuel Aranda/The New York Times 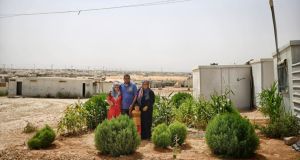 Walid Lebad with his family outside their trailer at the Zaatari refugee camp in Jordan. Lebad started a garden seven months ago using soil from a construction project on the camp’s outskirts and water recycled from his family’s bathing and cooking. Photograph: Samuel Aranda/The New York Times

Bicycles are the new basics for the world’s largest concentration of Syrians who have fled their country’s bloody civil war. Thousands traverse this camp’s few paved roads and acres of rocky dirt, souped-up with extra seats and milk crates to ferry groceries, bulky fans and small children.

Grown men ride hot-pink numbers, ringing tinny bells to clear their paths, to jobs in the sprawling marketplace or menial labour for aid groups. Boys adorn theirs with streamers and stickers, feathers and heart-shaped mirrors. The hour-long trudge to the supermarket on the camp’s edge now takes 10 minutes on two wheels.

“This is what we have,” Louay Al Hajj Ali (37) says as he propels a bicycle with his one-year-old daughter and four-month-old niece in a crate. Ali’s five simple words could serve as a motto for Zaatari, the 20sq km (8sq mile) camp near Jordan’s border with Syria now in its fourth year. Chaos and desperation have settled into an orderly grind, as the refugees’ resignation and resilience combine with major infrastructure investments to make the place feel ever more like an entrenched city than a makeshift way station.

As the West grapples with a new flood of asylum seekers bursting across Europe’s borders, the vast majority of Syrian refugees remain in the region: 1.9 million in Turkey, 1.2 million in Lebanon and 630,000 registered here in Jordan. Underfunded aid agencies and overburdened host countries have been struggling for years to support them.

With the World Food Program having cut vouchers this month to the 229,000 Syrians living in Jordanian cities – where it is illegal for them to work – the once-reviled Zaatari camp is increasingly seen as the most stable spot for refugees. While growing numbers yearn to make the journey to Europe, many here have all but surrendered to a life of limited possibilities.

Until recently, virtually every family imagined an imminent return to Syria as soon as the country’s president Bashar al-Assad fell. Now, many see their beloved homeland as lost, and grudgingly accept that Zaatari is somewhere they will be for a while. Refugees have planted vegetables, flowers, even trees that will not bear fruit for years in their compounds cobbled from corrugated tin and trailers. Unicef is spending €33.7 million to install water and sewage systems and Germany is to build a solar power station at a cost of €18 million. A recent UN report estimated that residents run 2,500 shops – scores of new ones repair bicycles – generating a total of €12.5 million per month.

“We’ve become used to a system here, and a way of life,” explains Ola Mahmeed (26), a mother of five who was applying for a two-day “vacation” to visit relatives in nearby Irbid. “There’s order, in terms of security, in terms of services. Anything I can think of I can find now in the market.”

Zaatari’s occupants say they would still jump at any chance to leave. Complaints are rife about electricity, which since June has been available only at night; rationed water; and, especially, the dismal quality of the schools. Last year, classes in the camp were crammed with up to 90 children; of those who took Jordan’s 12th grade exam, 3 per cent passed.

The camp’s population has dropped to 79,000 from 83,000 in April (and 156,000 in March 2013). While the rate of Syrians leaving Jordan has doubled to 120 per day in September from 60 in July, the UN High Commissioner for Refugees found that Zaatari residents are less likely to exit than those outside. Still, Hovig Etyemezian, the camp’s director, sees “an alarming trend” of young men selling land in Syria to finance precarious journeys to Europe.

“This is the way forward,” says a 26-year-old who left on Sunday hoping to join a cousin in Stuttgart, Germany, or former Zaatari neighbours in the Netherlands and Sweden. “I have a degree, and for five years I have not worked with my degree,” says the man, who was trained as a lab technician but has been selling stationery in Zaatari. “I want a career.”

Bassem Zuhri(42) would love to follow him – “I wish today I could leave” – but he cannot afford €350 passports for his two wives and five children. Profits at Zuhri’s bridal shop, where elaborate dresses studded with rhinestones rent for the equivalent of €22 a day, were slashed this summer by the €140 monthly cost of a generator.

Amid the vast monotone is a facade of faux green brick. Inside, the courtyard has a mural of mountains behind a lake with a tiny sailboat, cabin and young apple tree. “He said, ‘I’m going to paint you a new tree, without apples, because it kind of symbolises your life here,’” says Suleiman Shalabi (40), a barber with nine children, referring to a relative who decorated the place.

Others are planting actual trees – and corn, tomatoes, watermelon, even waist-high sunflowers that follow the light as it crosses the desert camp. Walid Lebad (42) wheelbarrowed red soil from a construction site on the camp’s edge to start his garden seven months ago, and recycles water from bathing and cooking to nurture it.

“This is called the white city: The sand is white, the caravan is white,” says Lebad, a father of five. “We don’t want them to grow up without any colour.” Ali Suleiman (23) says the sweet chirping of the four yellow canaries he keeps in cages “makes us forget where we are”.

Khaled Zoubi (36) started selling the birds about a year ago. As winter waned, he planted an olive tree and a lemon tree in the courtyard, though he rejects any suggestion that he, too, is growing roots in Zaatari. “As long as we’re here, it’s as if I’m going to live here forever,” he explains. “But if I had an opportunity, I would leave, even on 24 hours’ notice.”

If schools are the barometer of any community, Zaatari has a poor record. Parents complain that children learn little. Teachers lament pupils who disappear for months at a time and scant supplies. “The student comes, he says, ‘I don’t have a pencil.’ Where should I get him a pencil?” says Fahed Khazalaah, assistant principal at School No 3, where only three boys showed up for one class recently.

The UN says 20,000 of Zaatari’s 29,000 school-age children were enrolled last year. It is tripling the number of school’s this year to bring down class size to a maximum of 50. There are also 32 “informal education” centres where courses in computers, welding and electrical wiring can be taken .

Etyemezian, the camp’s director, says he was trying to make arrangements for college classes. “That is the single biggest worry I have: these generations of Syrians who are being born here, and their parents are saying why would I send them to school if there are no opportunities,” he says. “With infrastructure, fine, you have challenges that affect everyday life. With education, it’s the entire future of the Syrians.”

Infrastructure is its own mountain. With electricity bills in the region of €0.9 million a month and the camp’s grid groaning from overuse – washing machines and televisions are not officially allowed but ubiquitous – Etyemezian pulled the plug in June. Refugees spent the sweaty summer with as little as six hours of electricity each night (it is now eight).

Rationing is likely to continue until the solar power station is finished next year. It will be months, too, until Unicef standardises the bathrooms most refugees built to avoid the fetid communal ones, and installs 2,500 water tanks, aiming to eliminate the 300 daily truck trips that bring water in and take waste out.

Such huge projects suggest aid workers see a long lifespan for the camp. “We don’t really ask that question that much,” Etyemezian says. “What we are saying already is the longer-term development infrastructure is cheaper and more efficient and more dignified.”

The first bicycles started showing up more than a year ago, but the boom came around April with a donation from Amsterdam of 400 broken-down two-wheelers that had been abandoned. Zaatari’s entrepreneurs smuggled in many more. One shiny silver bike bears a Reebok sticker, a black one says “prosperity” on the crossbar, and another has the faded moniker of Gazelle NL, a Dutch model that retails for about €450. Most bikes sell for about €90, new tires for €10-€15 and seats sewn from Oriental fabrics go for just over €1.

“You cannot even start to know how much it has changed our lives,” says Issa Suleiman (28). “It’s a very basic necessity. It has made life more bearable.”