Jaish al-Islam says battles with ‘Assad gangs’ in areas such as Ghouta, Homs and Aleppo 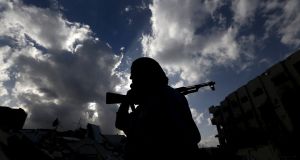 A rebel fighter carries his weapon in the rebel-controlled area of Jobar, a suburb of Damascus, Syria. Photograph: Bassam Khabieh/Reuters.

A major Syrian rebel group has said the war had not stopped since a cessation of hostilities agreement came into effect. The group has accused the government of violations and said a ceasefire was not possible while “militias and states kill our people”.

The Jaish al-Islam group is one of the biggest rebel factions fighting president Bashar al-Assad in western Syria and an influential member of the main Saudi-backed opposition council, the High Negotiations Committee.

A UN official said on Thursday the cessation of hostilities that came into effect on Saturday was holding but remained fragile and that incidents have been contained in the provinces of Homs, Hama, Latakia and Damascus.

Jaish al-Islam said: “Our confrontations with the Assad gangs did not stop, whether in the Ghouta, in Homs, or in Aleppo, and as far as we are concerned, the war effectively did not stop on the ground in the shadow of these violations”.

The group said it faced a difficult military situation on one important frontline at al-Maraj outside Damascus, where government forces have gained ground since the cessation of hostilities agreement came into effect.

“The regime has been launching a fierce attack on the area for more than four months and we were surprised that after the declaration of the truce by the international community that this attack continued and the Assad forces took new positions in the area,” Jaish al-Islam said in a statement overnight.

The government has accused rebel groups of violating the agreement.

Jaish al-Islam said a ceasefire in circumstances where “militias and states kill our people, expel them and occupy our land” was tantamount to unacceptable surrender “after all this blood that has been spent”.