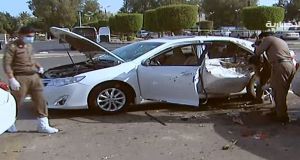 In this TV grab from footage released by Al-Ekhbariya, Saudi security forces investigate the scene of an explosion in Jeddah, Saudi Arabia. A suicide bomber carried out an attack early Monday near an American diplomatic site in the western Saudi city of Jeddah, according to the Interior Ministry. Photograph: Al-Ekhbariya 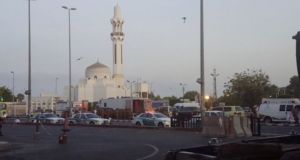 General view of security personnel in front of a mosque as police stage a second controlled explosion, after a suicide bomber was killed and two other people wounded in a blast near the US consulate in Jeddah, Saudi Arabia, in this still frame taken from video on July 4th, 2016. Photograph: Reuters TV

Suicide bombers struck three cities across Saudi Arabia on Monday in an apparently co-ordinated campaign of attacks as Saudis prepared to break their fast on the penultimate day of the holy month of Ramadan.

The explosions targeting US diplomats, Shia worshippers and a security headquarters at a mosque in the holy city of Medina follow quickly upon episodes of mass killing in Turkey, Bangladesh and Iraq claimed by the Islamic State group.

The attacks all seem to have been timed to coincide with the approach of Eid al-Fitr, the holiday that celebrates the end of the fast.

A Saudi security official said an attacker parked a car near the US consulate in Jeddah before detonating the device. The official said the government was checking the reports of blasts in Qatif and Medina.

In the only one of the three attacks that appeared to have caused many casualties, a suicide bomb attack was mounted near the security headquarters of the Prophet’s Mosque in Medina, the second-holiest site in Islam.

A video sent to Reuters by a witness to the aftermath of the Medina bombing showed a large blaze among parked cars in the fading evening light, with sounds of sirens in the background. A picture sent to Reuters showed a burnt and bleeding man lying on a stretcher in a hospital. 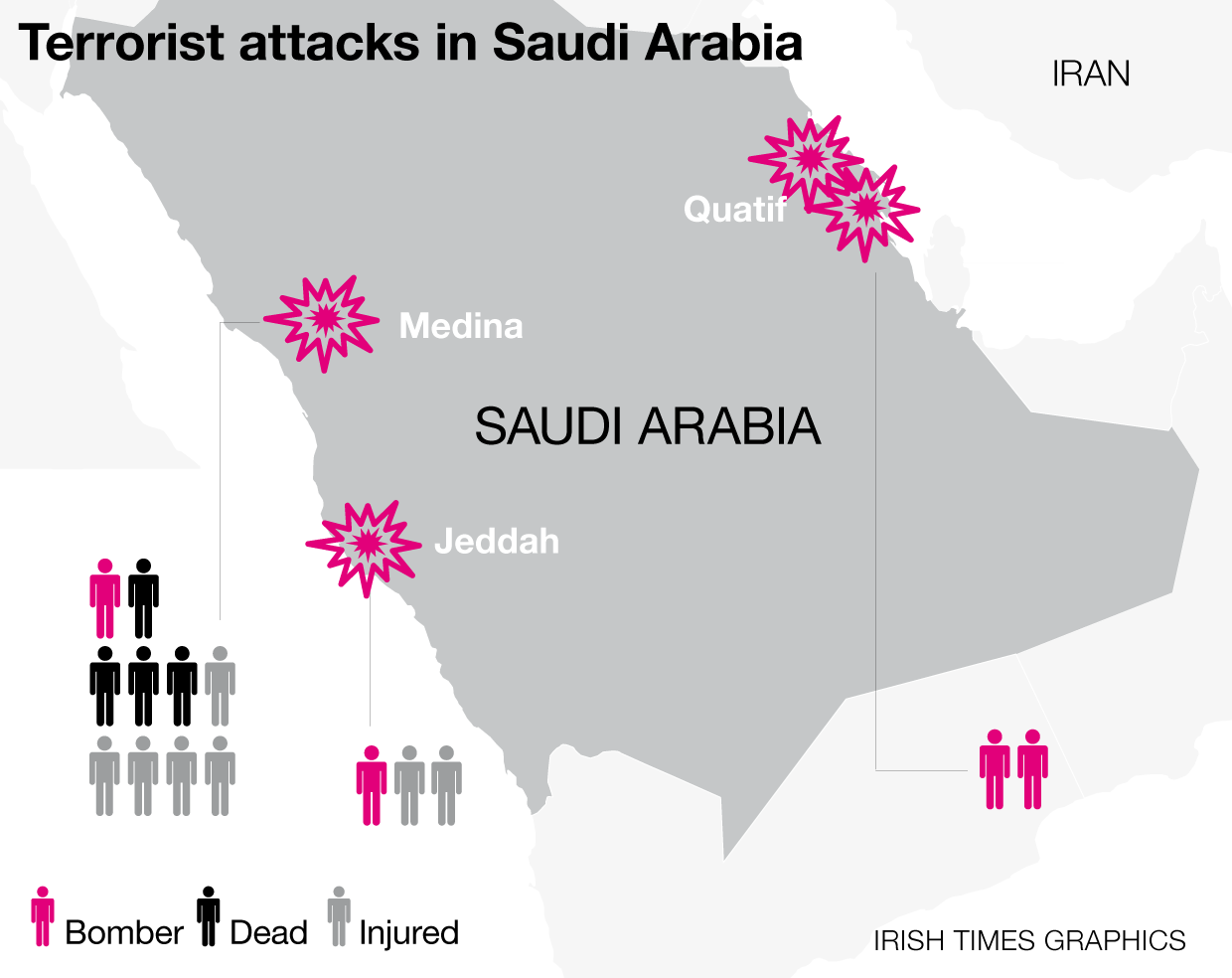 Other pictures circulating on social media showed dark smoke billowing from flames near the Mosque of the Prophet, originally built in the 7th century by the Prophet Muhammad, who is buried there along with his first two successors.

In Qatif, an eastern city that is home to many members of the Shia minority, at least one and possibly two explosions struck near a Shia mosque.

Witnesses described body parts, apparently of a suicide bomber, in the aftermath.

A resident of the city reached by telephone said there were believed to be no casualties there apart from the attacker, as worshippers had already gone home to break their fasts. Civil defence forces were cleaning up the area and police were investigating, the resident said.

A video circulating on social media and purporting to show the aftermath of a blast in Qatif showed an agitated crowd on a street, with a fire raging near a building, and a bloody body part lying on the ground. Reuters could not immediately verify the video.

Hours earlier, a suicide bomber was killed and two people were wounded in a blast near the US consulate in the kingdom’s second city, Jeddah.

The Jeddah blast was the first bombing in years to attempt to target foreigners in the kingdom. There was no immediate claim of responsibility.

Islamic State has carried out a series of bombing and shooting attacks in Saudi Arabia since mid-2014 that have killed scores of people, mostly members of the Shia Muslim minority and security services.

Another suicide blast at a mosque used by security forces also killed 15 a year ago.