Senior Afghan militant linked to IS ‘killed in drone attack’ 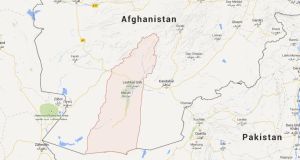 A map showing the southern province of Helmand (marked in red) in Afghanistan. Map: Google maps

A missile-firing drone killed six people in Afghanistan on Monday including a veteran militant believed to have defected to Islamic State (IS) from the Taliban, Afghan officials said.

Police chief Nabi Jan Mullahkhel said Mr Rauf was travelling in a car when the drone attacked. The other casualties included his brother-in-law and four Pakistanis, Mr Mullahkhel said.

He did not give more details of the attack. The United States operates drones over Afghanistan and neighbouring Pakistan. US-led forces in Afghanistan did not immediately respond to requests for comment.

Mr Rauf had been influential in Afghanistan’s jihadi movement for well over a decade.

Media reports last month said he had begun recruiting for Islamic State, part of a push by the movement to gain traction beyond its stronghold in Iraq and Syria.

Afghanistan’s main intelligence agency, the National Directorate of Security (NDS), said in a statement Mr Rauf was in charge of IS in southwestern Afghanistan and he was killed just after mid-day in “a successful military operation”.

Helmand’s deputy governor, Mohammad Jan Rasulyar, said Mr Rauf’s membership of IS could not be confirmed but his associates were dressed in black outfits often worn by IS members.

“It is too early to confirm that he was Daish but his people were wearing the same clothes and mask,” Mr Rasulyar said, referring to IS.

A US military report released by the anti-secrecy group WikiLeaks in 2011 said that Mr Rauf had tried to pass himself off as a low level Taliban worker who “delivered bread,” but that interrogators suspected he was more senior.

Also in 2011, Newsweek magazine reported that Mr Rauf had once led an elite fighting force close to Taliban leader Mullah Omar, and that after his return to Afghanistan in 2007 he had become the Taliban’s shadow governor in Uruzgan province.