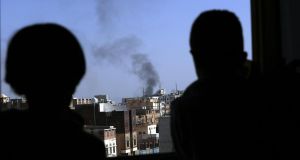 They told Reuters that the strikes focused on the presidential compound district in Sanaa, which the Shia Muslim rebels seized in September, and Houthi military sites in mountainous areas on the outskirts of the city.

A Saudi-led coalition intervened in Yemen’s civil war eight weeks ago to try to roll back Houthi advances across the Arabian Peninsula country and restore exiled President Abd-Rabbu Mansour Hadi in power.

Sanaa residents said air strikes also continued overnight on fighters loyal to former president Ali Abdullah Saleh who are allied with the Houthis in the conflict.

There were also 10 air raids overnight on Houthi and pro-Saleh forces in the oil-producing province of Marib, according to residents in the region.

In Saada province which borders Saudi Arabia in northwestern Yemen, the Houthis said they had seized several Saudi-controlled military sites and taken weapons and equipment there.