As both sides aim to revive relations, serious differences remain on Iran and Islamic State 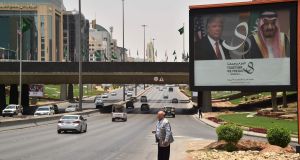 Saudi royals are set to roll out the red carpet for American president Donald Trump during his event-packed visit, although he arrives under the shadow of scandal and the distant threat of impeachment.

Both sides aim to revive relations downgraded during the Obama administration and to dispel the anti-Muslim image Trump projected during his presidential campaign and first days in office, when he issued a decree refusing entry to the US to travellers from seven Muslim-majority countries. Saudi Arabia was not among them.

Ahead of the Riyadh visit, Trump eased concerns among Muslim leaders by saying he would not shift the American embassy in Israel from Tel Aviv to Jerusalem – an explosive issue in the Muslim world – if it would harm prospects for peace between Palestinians and Israelis.

During the Riyadh stop on his first official foreign trip, Trump is to attend three high-level Sunni gatherings: a bilateral summit with Saudi Arabia’s King Salman; a multilateral summit with rulers from the Gulf Co-operation Council – Saudi Arabia, the United Arab Emirates, Oman, Bahrain, Qatar and Kuwait – and lunch with leading figures from 50 Muslim countries, including Shia-dominated Iraq but excluding secular Syria and Shia Iran.

The Saudis have spent $68 million (€61 million) on the events, which include a concert starring Trump’s favourite country music star, Toby Keith.

The slogan of the programme, “Together we will prevail”, masks differences. The Saudis’ main aim is to prevail over Iran, which is touted by Riyadh as the chief destabilising force in the region. Riyadh would like Trump to honour his election pledge to “tear up” the agreement for curbing Iran’s nuclear programme in exchange for sanctions relief. Trump is committed to the deal but seeks to contain Iran militarily and politically.

Trump prioritises the fight against Islamic State, a group inspired by Saudi Arabia’s ultra-conservative Wahhabi ideology. Islamic State and al-Qaeda offshoot Jabhat Fatah al-Sham have received Saudi funds and arms during the war in Syria. The Saudi role in this conflict has been ignored by Washington, although the success of the anti-jihadi campaign depends on divorce between Arab backers and jihadi groups.

The US has supported the Saudi-led war in Yemen, which has devastated the country, led to the deaths of 11,000 civilians, wounded at least 40,000 and caused mass malnutrition and a cholera outbreak. Trump has deployed special forces in Yemen, authorised the delivery of weapons suspended by the Obama administration and is set to finalise the sale of $100 billion in arms to the kingdom, taking total Saudi weapons purchases from the US to $300 billion over a decade.

Tweet-prone Trump has also been invited to attend a Twitter forum but may not be asked to look in on a meeting between US captains of industry and Saudi officials and businessmen, where lucrative contracts are to be signed for oil, defence and other sectors. American visitors may wish to distance themselves from Trump’s troubles at home.

Although facing shrinking oil revenues, Riyadh has made such a substantial outlay on the Trump visit because the Saudis seek to promote their leadership of the Arab and Muslim worlds. The Saudis believe this is their right as guardians of Islam’s two holiest sites in Mecca and Medina. They intend to capitalise on the political vacuum created by the difficulties among former leading powers. Egypt is mired in domestic problems, Iraq is a failed state, and Syria has been laid low by war.