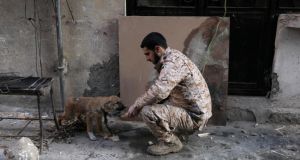 A Free Syrian Army fighter plays with a dog along a street in Deir al-Zor. The Syrian government excluded the largely rebel-held province - where polio broke out this year - from a 2012 vaccination campaign. Photograph: Khalil Ashawi/Reuters.

The Syrian government excluded the largely rebel-held province of Deir al-Zor - where polio broke out this year - from a 2012 vaccination campaign.

Authorities argue that most residents have fled the area although hundreds of thousands were still there, a Reuters investigation found.

Public health researchers say missing out on the Syrian province contributed to the reemergence there of polio, a highly infectious, incurable disease that can paralyse a child within hours but has been wiped out in many parts of the world.

In November, the World Health Organisation (WHO) said 13 cases had been found in the province. Two more have since been recorded there and the virus has surfaced in Aleppo city and near Damascus, the first outbreak since 1999 in Syria, where civil war has raged since a crackdown on protests in 2011.

A December 6th, 2012, WHO statement said it, in conjunction with the Syrian Ministry of Health and the United Nations Children’s Fund, had launched a campaign to vaccinate “all children below the age of five against polio”.

It said the campaign, involving 4,000 health workers and volunteers, would cover roughly 2.5 million children in 13 of Syria’s 14 governorates except for Deir al-Zor as “the majority of its residents have relocated to other areas in the country”.

It was not possible to contact the Syrian government for comment on its reported decision to leave out Deir al-Zor, a region of roughly 1.2 million people, where more than 600,000 under 15s were living in 2012, according to WHO data.

By December of that year, rebels had taken territory in other provinces as well.

While international agencies support such vaccination campaigns, designed to fill gaps left when emergencies prevent routine vaccinations, it is a country’s government which decides when and where they will take place.

Asked to comment on researchers’ allegations aid groups should have raised the alarm earlier and prepared better, Chris Maher, who is coordinating the regional polio response for the WHO, said it had warned vaccination rates were falling.

The December 2012 and the October-November 2013 campaigns were planned and organised in response to that, he said. “In a complex emergency setting, it is not that easy to continue routine campaigns.”

Mr Maher said it was reported that 67,000 children under the age of five were subsequently vaccinated in Deir al-Zor in January 2013.

Public health researchers say that is a coverage rate of around 50 per cent, insufficient to prevent polio from spreading, based on census data. The actual population is hard to establish; some residents fled while other people fled into Deir al-Zor from elsewhere.

Repeated vaccinations and high coverage levels are needed to interrupt transmission of the virus and prevent outbreaks.

“There was a lack of a proper campaign to vaccinate children across the country over the past two years,” said Dr Adam Coutts, a Lebanon-based public health researcher who has been studying the humanitarian response in Syria.

“With the breakdown of the health system, sanitation and nutrition, the exclusion of Deir al-Zour from the vaccination campaign provided the ideal conditions for an outbreak to occur.”

It was not clear why the remote province near Syria’s border with Iraq was singled out. The city of Deir al-Zor is partially controlled by Syrian government forces while the countryside around it is in the hands of rebels fighting to remove president Bashar al-Assad.