Israel plans 300 homes in Ramot and nearly 800 in Gilo 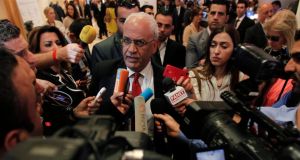 Palestinian officials have warned that Israeli plans to build new homes in Jewish neighbourhoods of east Jerusalem could scupper efforts by US secretary of state John Kerry to revive Middle East peace talks.

Israel’s housing ministry announced yesterday that it was issuing tenders for the construction of 300 units in Ramot, in the north of Jerusalem, and is planning almost 800 new units in Gilo, at Jerusalem’s southern tip. Both neighbourhoods were built on West Bank land captured by Israel from Jordan during the 1967 Six-Day War and subsequently annexed by Israel and incorporated into Jerusalem’s municipal boundaries, moves not recognised by the international community.

Palestinian negotiator Saeb Erekat said Israel had a “systematic plan for destroying Mr Kerry’s efforts, which involves an escalation of settlement building, a displacement of the population of the Jordan Valley, an increase of settler attacks against our people and confiscation of our land”.

The new homes in Ramot and Gilo, areas considered by Palestinians as settlements, were approved last year despite strong international objections.

Israeli construction in the West Bank and Jewish neighbourhoods of east Jerusalem is the main issue holding up US efforts to get the sides around the negotiating table again.

Israeli prime minister Binyamin Netanyahu has rejected Palestinian calls for another settlement freeze, instead calling for a resumption of bilateral talks without preconditions. However, in order to boost Mr Kerry’s peace efforts, the government has ordered a de facto freeze on certain new construction plans.

Palestinian president Mahmoud Abbas reportedly told advisers that as the US tried to restart Middle East peace talks, he was under intense international pressure to return to negotiations with Israel and drop demands for a Jewish settlement freeze in the West Bank.

According to Palestinian media reports, Mr Abbas told delegates of the Palestine Liberation Organisation’s executive council earlier this week that he was faced with a difficult choice: alienate Washington or cave in and face stiff opposition at home.

Aides say Mr Abbas expects a formal proposal from Mr Kerry in the coming weeks to renew the talks that were broken off in 2010. All the indications are that Israel will accept an invitation to renew negotiations.

1 Eating out in Dublin – the homeless way
2 Irish Times poll: Large majority want change of government
3 Miriam Lord: Greens take to the beach as signs emerge of a rising tide
4 Yacht captain guilty of drunk sailing had ‘God given right’ to be on Liffey
5 Some 45,000 taken off waiting lists last year without seeing medical specialist
Real news has value SUBSCRIBE