Over 65 dead after four bomb blasts in Baghdad 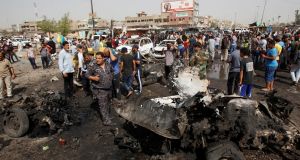 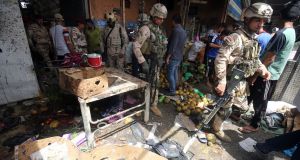 Iraqi security forces gather at the site of a suicide bombing in the Shaab area in northern Baghdad on Tuesday. Interior ministry spokesman Saad Maan said the attack was carried out by a female suicide bomber, while a police colonel said a roadside bombing was followed by the suicide attack. Photograph: Ahmad Al-Rubayeah/Getty Images

At least 69 people have been killed in Iraq by a wave of car bombs in Shia-dominated neighbourhoods of Baghdad.

The Islamic State has claimed responsibility for the deadliest bombing of the day, which took place in Baghdad’s north-eastern Shaab neighbourhood where at least 34 people were killed and 75 injured.

In that attack, a roadside bomb first exploded outside the concrete blast walls surrounding an open-air market, followed by a suicide bomber who blew himself up as people gathered to help the victims of the first explosion.

Islamic State, also known as Isis, said in an online statement that the attack was carried out by an Iraqi who targeted members of Shia militias.

Later, a parked car bomb struck a fruit and vegetable market in the Shia-dominated neighbourhood of Dora, in southern Baghdad, killing eight people and injuring 22.

In north-east Baghdad, a suicide bomber targeted a restaurant in the Habibiya neighbourhood, killing nine and injuring 18.

A spokesman for the Baghdad operations command told state television the attacker in the Shaab neighbourhood had detonated an explosives-filled vest in coordination with a planted bomb. Initial investigations revealed that the bomber was a woman, he said.

Islamic State said in a statement distributed online by supporters, that one of its fighters had targeted Shia militiamen with hand grenades and a suicide vest. There were no immediate claims of responsibility for the other bombings.

Security has improved somewhat in Baghdad in recent years, even as the Sunni militant Islamic State seized swathes of the country almost up to the outskirts of the capital.

But attacks claimed by Islamic State in and around the city last week killed more than 200 people, sparking anger in the streets over the government’s failure to ensure security.

There are fears that Baghdad could relapse into the bloodletting of a decade ago when sectarian-motivated suicide bombings killed scores of people every week.

That has cranked up pressure on prime minister Haider al-Abadi to resolve a political crisis or risk losing control of parts of Baghdad even as the military wages a counter-offensive against Islamic State in Iraq’s north and west with the help of a US-led coalition.

Mr Abadi has said the crisis, sparked by his attempt to reshuffle the cabinet in an anti-corruption bid, is hampering the fight against Islamic State and creating space for more insurgent attacks on the civilian population.