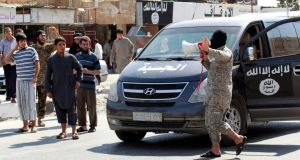 An Islamic State militant uses announces to residents of Taqba city that Tabqa air base has fallen to his group. Photograph: Reuters

Senior Republicans yesterday called for expanded air strikes against Islamic State militants in Iraq and for the first time in Syria, to destroy their terrorist network in the wake of the killing of US journalist James Foley and to protect against an attack on American soil.

Texas congressman Mike McCaul, the chairman of the House of Representatives committee on homeland security, called Islamic State, also known as Isis, “the worst threat to the US since 9/11”.

“We need to expand air strikes so you can ultimately defeat and eliminate Isis,” he told ABC. “Don’t kid yourself for a second that they aren’t intent on hitting our homeland, I think the threat is very real.”

But a leading Senate Democrat cautioned against overstating the dangers Isis could pose. “I don’t think we can simply dismiss them. But to jump from what they have done, which is horrific, to the assumption that they’re going to be an immediate, and within days, a threat to us here in our homeland, I think you don’t jump to that,” said Senator Jack Reed of Rhode Island, speaking on CNN.

Isis last week beheaded Foley, and threatened the same fate to another US journalist held hostage, Steven Sotloff. A man with an English accent was heard threatening the US in retaliation for the air strikes carried out so far against Isis, before killing Foley on camera.

The British ambassador to the US, Sir Peter Westmacott, told CNN on yesterday British intelligence services were close to identifying the man who killed Foley.

In the US, the chairman of the House intelligence committee, Michigan’s Mike Rogers, said terrorists were “one plane ticket away from US shores” because of the preponderance of US- and European-born fighters who have travelled to the Middle East to join the jihadist cause.

Senator Lindsey Graham, from South Carolina, told CNN he did not believe the US needed to signal its intent to the Syrian president, Bashar al-Assad, before carrying out air strikes within Syria.

“I don’t begrudge him a vacation but there is a sense of disconnect with a speech saying you need to be relentless in addressing the horrific murder of James Foley - and then going golfing,” she said

Meanwhile, Isis has seized most of an airbase in eastern Syria and are tightening a stranglehold on a minority Turkoman community north of Baghdad. Militants breached the borders of the Tabqa base, which was the last base east of Aleppo still held by the Syrian regime, and appeared certain to seize full control within days.– (Guardian service)