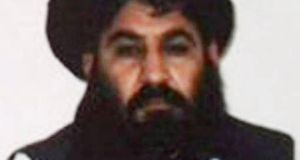 An undated handout picture of Mullah Muhammad Akhtar Mansour, the new leader of the Taliban. His appointment has riled many senior figures angry about the implication that Mansour covered up former leader Mullah Omar’s death for more than two years.

A top Taliban official announced his resignation on Tuesday amid a growing leadership struggle in the Afghan insurgent movement after the news of the death of leader Mullah Omar last week.

The swift announcement that Omar’s longtime deputy, Mullah Muhammad Akhtar Mansour, would be the new leader has riled many senior figures angry about the implication that Mansour covered up Omar’s death for more than two years.

The infighting could split the Taliban and threatens tentative peace talks with the Kabul government to end 13 years of war that began with a US-led campaign after the September 11th, 2001, attacks on the United States.

Since Mansour’s appointment was announced by the Taliban leadership council based in Quetta, Pakistan, it has been denounced by several top members of the group, including Omar’s brother, who has called for an assembly to choose the leader.

On Tuesday, Taliban official Syed Muhammad Tayab Agha announced he was stepping down as director of the Political Office in the Qatari capital Doha, originally set up to enable the Taliban to negotiate in any peace process.

Agha said he considered the decision to conceal Omar’s death - generally attributed to Mansour - a “historic mistake by the individuals concerned”.

He said previous leaders appointed outside the country going back to the invasion by Soviet forces, and the government set up after the Taliban were ousted, had “very bad repercussions”.

The leader should be appointed “in presence of the courageous mujahideen in their strongholds inside the country”, Agha said, referring to Islamist fighters.

Taliban spokesman Zabihullah Mujahid said he could not confirm the statement came from Agha but two senior members of the Qatar office confirmed he had resigned on Monday.

“Relations between Mullah Mansour and Tayyab Agha had never been friendly even when Mullah Omar was alive,” said another Taliban member, who is close to Agha.

He said Mansour’s decision to send his delegation to the first official peace talks between Taliban and Afghan government representatives last month in Pakistan had bypassed Agha, the head of the negotiating team in Qatar.

Considered close to Pakistan, Mansour faces a challenge to hold the movement together with hardline commanders pressing for an end to talks and the continuation of fighting that has been increasingly successful in recent months.

It remains difficult to assess how serious a threat Mansour faces but the difficulties point to a suspension of the peace process while his position is consolidated. Several commanders are known to have stopped fighting until the situation is clarified.

Perhaps in reaction to the dissent, the Taliban posted videos on Facebook, apparently showing worshippers acclaiming Mansour as leader.