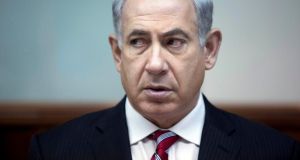 Israel’s prime minister Binyamin Netanyahu: “Together we will try and advance a way to find an opening for negotiations with the Palestinians in order to reach an agreement.” Photograph: Reuters/Abir Sultan

Israeli prime minister Binyamin Netanyahu has distanced himself from comments from his deputy defence minister Danny Danon, who said the government opposes the two-state solution and the only reason Mr Netanyahu continues to call for peace talks with the Palestinians is because he knows that the negotiations will never lead to a peace deal.

The comments from Mr Danon , a Knesset member from Mr Netanyahu’s ruling Likud party, were particularly embarrassing for the Israeli leadership, as they came ahead of this week’s visit to the region of US secretary of state John Kerry, who is trying to get Israel and the Palestinians to resume peace talks.

Mr Netanyahu told yesterday’s cabinet meeting that officials must speak in unison in favour of returning to the negotiating table.

“Together we will try and advance a way to find an opening for negotiations with the Palestinians in order to reach an agreement,” he said. “That agreement will be based on a demilitarised Palestinian state that recognises the Jewish state and solid security arrangements.”