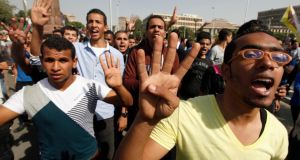 Cairo university students and members of the Muslim Brotherhood shout slogans against the military in a demonstration in Cairo in October, 1913. Many young members of the Brotherhood blame their elders for bungling the Arab Spring revolt and their chance to govern. Photograph: Mohamed Abd El Ghany/Reuters

A veteran leader of the Muslim Brotherhood was so alarmed by the rising calls for violence from the group’s youth that he risked arrest to urge the movement to stay peaceful. Already hunted by the police for his role in a banned organisation when he released his online manifesto in May, the leader, Mahmoud Ghuzlan, conceded that shunning violence in the face of the government crackdown on the Brotherhood was “like grasping a burning coal”. But, he said, history taught that “peacefulness is stronger than weapons, and violence is the reason for defeat and demise”.

It was a losing argument, or so it now appears. The police in Cairo soon found and arrested him. A chorus of Islamists mocked him on social media as naive, unrealistic and hypocritical. And his manifesto for “peacefulness” was quickly drowned out by official statements that have come closer to endorsing violence than anything the organisation has said or done in more than four decades – an ominous turn for both Egypt and the West. Not only is the Brotherhood Egypt’s largest political organisation, its long history gives it unique influence among Islamists beyond the Middle East to Europe, North America and elsewhere.

Brotherhood officials insist that the group still opposes violence as immoral and counterproductive. There are no signs that it is seeking to start an armed insurgency or ally with others who have done so – such as the Sinai arm of Islamic State.

But some in the Brotherhood also acknowledge privately that the demands of young members for “retribution” against participants in the military takeover in Egypt two years ago are threatening to stretch the group’s ideology toward violence, widening a generational split at a time when the Brotherhood’s discipline is fraying and many young members blame their elders for bungling the Arab Spring revolt and their chance to govern.

“The aggrieved party has the right to fight back against the aggressor,” more than a hundred Muslim scholars wrote on May 27th in an open letter, “The Egypt Call,” that the Brotherhood formally endorsed the next day. Labeling President Abdel-Fattah al-Sisi’s government a “murderous regime”, the scholars wrote that Islam prescribed that those who collaborated with him – such as “rulers, judges, officers, soldiers, muftis, media professionals and politicians” – should be punished as “murderers”. All are “murderers according to religious law,” they wrote. (More than 620,000 other people have since endorsed the statement online.)

Newly formed groups with names like Revolutionary Punishment and Popular Resistance, which receive online support from many social media accounts that also back the Brotherhood, have already claimed responsibility for small-scale bombings on police stations, empty businesses and electric utilities in recent months.

At the end of June, the Giza chapter of Popular Resistance also claimed responsibility online for a remotely detonated bomb that killed the country’s top prosecutor, Hisham Barakat. (The group’s initial statement was later deleted without explanation, but no one else has since taken responsibility.)

The attack was the most significant assassination in Egypt in decades, and it seemed just the kind of punishment the scholars had endorsed four weeks before. A statement from the Brotherhood denounced the killing but blamed al-Sisi for provoking such violence.

The Brotherhood, founded in Egypt in 1928, is the movement that defined political Islam and remains its central reference point. It has prided itself for decades on a nonviolent and election-oriented approach to political change. Some of its acolytes founded moderate Islamist parties in Turkey and Tunisia, while others like Ayman al-Zawahri, the ideologue of al-Qaeda, have broken with the Brotherhood to form anti-Western militant groups.

After the uprising that toppled President Hosni Mubarak in 2011, the Brotherhood’s years of patient organising helped it win the most votes in Egypt’s free elections, apparently vindicating its strategy and undermining the militants. But since the ousting two years ago of President Mohammed Morsi, a Brotherhood leader, the group has suffered a wave of repression more severe than at any time in its history, exceeding even the jailings and executions under President Gamal Abdel Nasser in the 1950s and 1960s.

Al-Sisi’s government has called the Brotherhood a terrorist group and criminalised its membership. Security forces have killed more than 1,000 of its supporters in mass shootings, detained tens of thousands and seized the group’s assets. Judges have issued mass death sentences for hundreds of people thought to be Brotherhood members at a time, including Morsi and other top leaders.

Brotherhood-linked satellite television networks set up in Istanbul are rife with calls for revenge. Misr Alaan, the satellite network most clearly linked to the Brotherhood, conducted a telephone interview this spring with an observer on the scene of a clash with the police in the Cairo neighborhood of El Matareya.

“That is what I was just saying!” Mohamed Nasser, a host on the network, replied. “I sent a message to the wives of the officers and told them that revolutionaries will kill their husbands!” Previously famous for the obedience and discipline of its members, the Brotherhood has become much less hierarchical and more diffuse since its decimation in the crackdown, said Nathan J Brown and Michele Dunne, two scholars at the Carnegie Endowment for International Peace who recently released a study of the group. “This is not your grandfather’s Brotherhood,” Brown said in an interview.

Leaders in exile and members inside Egypt say the group’s top officials now exert only limited control over the Brotherhood’s grass roots in the streets. The group has said it held internal elections in February 2014 for a new executive committee to manage the crisis. But the Brotherhood has not disclosed the identity of the board members because of concerns for their safety.

Both members and senior officials, though, say that a new generation of Brotherhood leaders sharply critical of their elders has muscled its way into power. Speaking on the condition of anonymity for his safety, one young Brotherhood leader in Cairo called the generational change “the only beneficial thing to happen because of the coup”.

Yahia Hamid, a 37-year-old former minister in Morsi’s cabinet now living in Istanbul, said in an interview that he and other younger members blamed their former leaders for misunderstanding the “revolutionary” moment after the ouster of Mubarak four years ago.

“The moment did not belong to the Muslim Brotherhood but to all of Egypt,” he said, faulting the group’s leaders for seeking to negotiate with the military, for trying to change the authoritarian state from within and for failing to keep collaborating with left-leaning activists who had been allies in the uprising.

Hamid said the group had now adopted a “revolutionary” strategy that meant continuing nonviolent protests, rebuilding trust with other factions and preparing for what the Brotherhood considers al-Sisi’s inevitable failure. Violence, he said, would bolster the government and drag the country toward a civil war, and it also went against decades of Brotherhood indoctrination.

“You can’t take an engineer and turn him into a doctor,” he said. Even in the Muslim scholars’ call for the punishment of those who back the “murderous regime,” its authors added the qualification that “retribution must be taken against them within religious regulations.” The same call went on to urge resistance “using appropriate means, such as civil disobedience”.

But some Brotherhood supporters are frustrated with non-violence. When a group of Islamists was executed after a military trial in May, a Brotherhood spokesman using the name Mohamed Montaser declared that the only solution for such “murderers” was “retribution” and “a revolution that reaps heads from atop rotten bodies”.

“The revolution will not be still until it exterminates all oppressors,” he said, and many others online complained that even those threats were too mild. That was when Ghuzlan and another senior Brotherhood leader, Abdel Rahmanal-Barr, felt compelled to respond. “Peacefulness is not a tactic or a manoeuvre,” Barr, a religious scholar sometimes known as the mufti of the Brotherhood, said in another manifesto posted online. “It is a fundamental choice based on religious jurisprudence, realistic awareness and a correct reading of history.”

Barr was arrested with Ghuzlan days later, on June 1st. An Egyptian court had already sentenced both in absentia to death. (The al-Sisi government treats all Brotherhood leaders as “terrorists,” even if they publicly oppose violence.) Their calls for “peacefulness” had already set off backlash from young Brotherhood supporters. “What you’re describing isn’t called ‘peacefulness,’ it’s called, ‘shame and humiliation,’” wrote one online commentator, Asmaa Hussein. “The revolution is the streets now,” another, Essam el-Masry, wrote back to Ghuzlan, “and the blood that was shed has overrun the meaning of facedown peacefulness.”