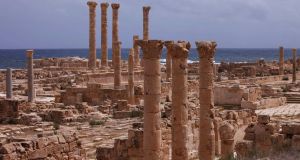 US military aircraft carried out strikes against Islamic State-linked militants in western Libya on Friday, killing more than 40 people in an operation targeting a suspect linked to two deadly attacks last year in neighbouring Tunisia.

It was the second US air strike in three months against Islamic State in Libya, where the hardline Islamist militant group – also known as Isis – has exploited years of chaos following Muammar Gadafy’s 2011 overthrow to build up a presence on the southern shores of the Mediterranean Sea.

The mayor of the Libyan city of Sabratha, Hussein al-Thwadi, told Reuters the planes struck at 3.30am (1.30am Irish time), hitting a building in the city’s Qasr Talil district where foreign workers were living.

He said 41 people had been killed and six wounded. The death toll could not immediately be confirmed with other officials.

Tunisian security sources have said they believe Tunisian Islamic State fighters have been trained in camps near Sabratha, which is close to the Tunisian border.

A US military officer said among those targeted in the air strikes was senior Tunisian operative, Noureddine Chouchane, believed to be connected to the attacks last year on a Tunis museum and the Souse beach resort which killed dozens of people.

Officials have said those two attacks, both claimed by Islamic State, were carried out by gunmen who trained in Libya.

“We are assessing the results of the operation,” said Col Mark Cheadle, spokesman for the Pentagon’s Africa Command.

Mr Thwadi, the Sabratha mayor, said officials visited the site of the strike and found weapons in the building. Some Tunisians, a Jordanian and two women were among the dead, he said, and several Tunisians who had recently arrived in Sabratha were among survivors. He gave no further details.

Since Gadafy was overthrown five years ago, Libya has slipped deeper into chaos with two rival governments each backed by competing factions of former rebel brigades.

As Islamic State has expanded in the north African country, taking over the city of Sirte and attacking oil ports, calls have increased for a swift Western response to stop the group establishing itself outside its territory in Iraq and Syria.

Western officials and diplomats have said air strikes and special forces operations are possible as well as an Italian-led “security stabilisation” plan of training and advising.

US and European officials insist Libyans must invite help through a united government, but say they may still carry out unilateral action if needed.