Events in Iraq will have violent repercussions in Syria, human rights investigators say 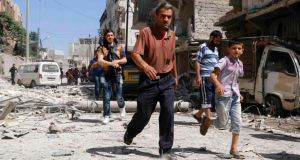 “We predicted a long time ago the dangers of spillover both ways, which is now becoming a regional spillover,” said Vitit Muntarbhorn, an international law expert who took part in the inquiry. “We are possibly on the cusp of a regional war and that is something we’re very concerned about.”

A report presented yesterday to the UN Human Rights Council said foreign Sunni jihadi militants and funds had poured into Syria, where rebel factions including Isis were wantonly abusing civilians in zones they controlled.

“A regional war in the Middle East draws ever closer. Events in neighbouring Iraq will have violent repercussions for Syria,” the report said.

“Growing numbers of radical fighters are targeting not only Sunni [Muslim] communities under their control but also minority communities including the Shias, Alawites, Christians, Armenians, Druze and Kurds,” it said of Syria.

Its reference to Sunni militants targeting Sunni civilians involved forceful pressure on Sunni women to comply with Sharia law and acts of revenge against Sunnis who had served in the Syrian government.

The report said Isis kidnapped almost 200 Kurdish civilians in an attack in the Syrian city of Aleppo at the end of May.

Mr Muntarbhorn said Isis was fighting other rebel groups in Syria more than it was fighting the Damascus government.

Isis had shown itself “willing to fan the flames of sectarianism, both in Iraq and in Syria. Any strengthening of their position gives rise to great concern,” the report said.

At least 160,000 people have been killed in Syria’s three-year conflict that began as peaceful demonstrations against Dr Assad and escalated into civil war.

Covering the period since mid-March, the UN report described how Syria’s government had regained strategic terrain in Damascus and Aleppo provinces through a mix of “brutal tactics with long-lasting sieges”, marked by barrel bombing. “Victims describe . . . the agony of being encircled, shelled and bombarded while slowly starving,” Brazilian chief investigator Paulo Pinheiro said.

The team of about 20 UN investigators interviewed 3,000 Syrians in Syria or neighbouring countries via Skype. They say they have documented war crimes and crimes against humanity committed by all sides and have drawn up four confidential lists of suspects for future prosecution.

“The international community, and specifically the [UN] Security Council, have yet to demand that the individuals perpetrating crimes against the men, women and children of Syria are held responsible. Through their inaction, a space has been created for the worst of humanity to express itself,” the report said.

The inquiry has received thousands of photographs published in January, smuggled out by a former Syrian military police photographer who said the images showed people tortured and killed in government-run detention centres.

“Many are emaciated, almost all bear marks of horrific abuse, including strangulation, mutilation, open wounds, burns and bruising,” Mr Pinheiro said. “Such injuries are consistent with torture methods previously documented by the commission in our 12 reports until now.” – (Reuters)