Middle East in ‘most dangerous moment’ since 2003 invasion

Turmoil in Iraq could lead to civil war, analysts and experts have warned 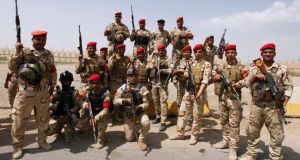 Members of Iraqi security forces pose as they guard volunteers who have joined the Iraqi Army to fight against the predominantly Sunni militants, who have taken over Mosul and other Northern provinces, travelling in army trucks in Baghdad today. Sunni Islamist militants gained more ground in Iraq overnight, moving into two towns in the eastern province of Diyala. Photograph: Ahmed Saad/Reuters

Turmoil in Iraq has plunged the Middle East into its “most dangerous moment” since the 2003 invasion and threatens to push the country into civil war, experts have said.

Professor Peter Neumann, of King’s College London, said the recent surge by al-Qaeda splinter group the Islamic State of Iraq and the Levant (Isis) threatens to trigger a “sectarian meltdown” that may spread into other neighbouring states.

Meda Al Rowas, senior analyst at IHS Country Risk, warned the country is at risk of “a gradual slide towards civil war”.

Earlier this week Isis militants took control of Iraq’s second city Mosul and Saddam Hussein’s home town of Tikrit, raising the prospect that the Sunni group would attempt to march on capital Baghdad to settle scores with the Shia-led government.

Professor Neumann said he expected the jihadist group’s popularity among Sunni Iraqis to fade eventually but warned: “How much damage can they do until that happens?

“I worry that in the meantime what we will see in Iraq is a sectarian meltdown, a huge confrontation between Shias, Sunnis and Kurds and that could spill into other countries.

“There is a risk that it will be even worse than what we saw about eight or nine years ago in Iraq, which was already pretty horrible. This is probably the most dangerous moment in the Middle East since the invasion of Iraq in 2003.”

The security expert said Isis had made some “very quick” recent gains in Iraq and is enjoying a “honeymoon” period among the Sunnis amid hostility towards the government.

“The speed was a surprise but not the fact that they were interested in doing that — it is their strategy to create an Islamic state.”

Meda Al Rowas, senior analyst at IHS Country Risk, said although the group — also known as ISIL — had spearheaded the offensive it appeared to have received support from other groups.

She said: “The ability to overrun multiple villages simultaneously is very likely to be facilitated by support from an assortment of smaller jihadist, Baathist, and tribal groups.”

Taking Mosul is seen as an important coup for the insurgents because it provides them with access to oil fields, weaponry and money.

But Professor Neumann was sceptical about their chances of making any inroads in Baghdad, which has a Shia majority.

“They are proverbially drunk with success and feel they have momentum and they are making very big announcements,” he said.

“The reality is there is no way they can take Baghdad. Even if they got in they wouldn’t hold it for more than 24 hours. If they tried it would be over-reach.”

Professor Neumann said Isis stands out from other groups in the region because they see themselves as a “multi-national” group.

“What they want to do is create a caliphate in the entire region going from Iraq to Syria, Jordan and Lebanon without borders. The crown jewel for them would be to ‘liberate’ Jerusalem.”

Isis is believed to have its roots in al-Qaeda in Iraq but formally emerged as a group last year. It is thought to be led by a shadowy figure known as Abu Bakr al-Baghdadi.

Its contingent has been swelled by thousands of foreign fighters joining their cause from several countries around the world, including Britain.

Professor Neumann said the group has a reputation as “extremely fierce” and “brutal” fighters and had been linked to crucifixions and decapitations.

He said: “If they capture you they will murder you in the most brutal way.”

Reports have suggested that Iraqi troops were among those fleeing as Isis advanced.

Professor Neumann said: “It was quite stunning that the Iraqi army which was supposed to defend these places just went running when Isis came in.”

The crisis has raised the spectre of Western intervention but although Britain has deployed a humanitarian team to Iraq, the Government insists there is no prospect of military involvement.

Professor Neumann said: “It is very difficult to see what could be done that would resolve it in one swoop. There is no silver bullet.

“However, I think sooner or later there will be air or drone strikes targeting key Isis positions, orchestrated by the West.”