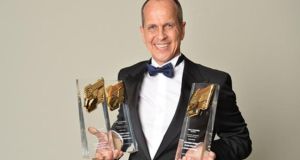 The Al Jazeera journalist released from Egyptian prison at the start of February has said he is “deeply concerned” for the future of freedom of speech.

In an interview with The Irish Times, Peter Greste said he feels his case fits within “a chilling narrative” which includes “the beheadings by Islamic State, the draconian responses of some governments, the Charlie Hebdo attacks and the killings in Denmark at the weekend”.

The Australian-born journalist was sentenced to 7-years imprisonment in December 2013 by the Egyptian government for threatening national security, alongside colleagues Mohamed Fahmy and Bahar Mohamed. Huge international pressure followed the sentence and he was eventually deported to Australia after more than 400 days in prison, including a month in solitary confinement.

Greste said the experience has made him feel “even more responsibility”. He added that he believes the mainstream media is “more important than ever” as it has the “ability to conduct conversations across different communities”.

He feels such dialogue is “crucial to peace” and he compared global conflicts to those of a family, saying that “you have to keep these conversations going” rather than letting someone “disappear”. The situation now in media was that journalists were forced to avoid certain types of stories which is “incredibly dangerous”.

Greste, who has been covering events in east Africa and the Middle East for the last 20 years, said everything had felt “topsy turvy” since his release and was now “ quite overwhelming”. In prison, he and his colleagues had been very careful to develop a routine where he said the “biggest danger was your own head”.

He said that he had practised meditation every day and ran up and down a 30m corridor outside a cell for an hour each day bringing his total “up to between 8 and 10km each day”. He had also acquired material to study for an MA in international relations.

Last night Greste, Fahmy, and Mohamed were awarded a special judges prize by the Royal Television Society for services to journalism. Fahmy and Mohamed were released on bail last week and face a re-trial on Monday. Hopes are high that they will secure a full release.

The Egyptian government has been facing heavy international condemnation following the arrests of thousands of people, including the Irish teenager Ibrahim Halawa, after the deposal of the previous president Mohamed Morsi.