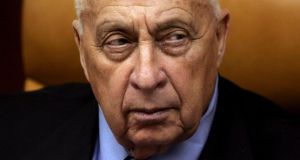 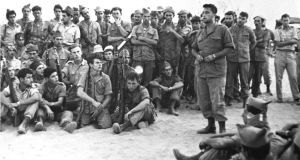 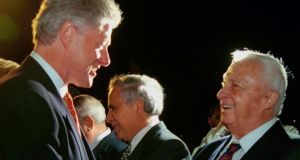 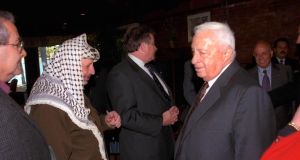 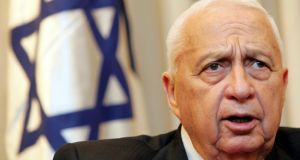 Former Israeli prime minister Ariel Sharon has died after being in a coma for eight years. Photograph: David Furst/Files/Reuters 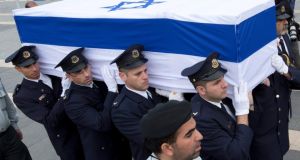 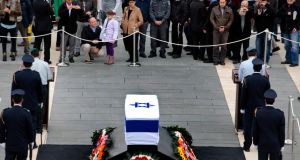 Thousands of Israelis bade farewell today to former prime minister Ariel Sharon, the controversial politician and former military leader whose actions reshaped the Middle East, as his body lay in state outside parliament in Jerusalem.

Sharon died at the age of 85 yesterday after eight years in a coma caused by a stroke he suffered at the pinnacle of his political power. He will be buried tomorrow in a military funeral on his farm in southern Israel.

"They say old soldiers do not die, they fade away. Arik Sharon faded away eight years ago, and now we truly say goodbye to him," Israeli justice minister Tzipi Livni, using Sharon's nickname, wrote in a tribute today.

Sharon was one of Israel's most prominent military strategists and most powerful and decisive political figures. He spearheaded military campaigns in several wars with the Arab world, expanded Jewish settlement-building on land the Palestinians want for a state, and made the shock decision to withdraw from one of those territories, the Gaza Strip.

Famously beefy and brusque, Sharon was also widely hated by Arabs for his policies, including a 1982 invasion of Lebanon as well as military crackdowns and settlement-building in occupied territories.

Prime minister from 2001 to 2006, Sharon was incapacitated by a stroke shortly after he resigned from the right-wing Likud party and founded a centrist faction to advance peace with the Palestinians, whose 2000-2005 "Intifada" uprising he had battled with air strikes and fierce military offensives.

In parliament's main plaza, Israelis filed past Sharon's coffin, which was draped in the blue-and-white national flag.

The mood was sombre but not deeply mournful, eight years after Sharon fell from public view. A few in the crowd wept, but many others paused to snap photographs of the coffin with their cellphones.

"Whatever he decided to do, he followed it through to the end - and that was his greatness," said Shlomo Tal (74) from Jerusalem, who came to parliament to pay his respects.

Sharon drew the long-standing enmity of Arabs over the 1982 massacre of hundreds of Palestinian refugees at the Sabra and Shatila camp in Beirut by Lebanese Christian militiamen allied to Israel, where he was defence minister at the time.

A lifelong farmer renowned for his big appetite, Sharon was known as "the Bulldozer", in part for his headlong pursuit of hardline policies that included a major growth in settlements across terrain Israel captured in the 1967 Middle East war.

But the United States and other foreign powers mourned him as a peacemaker in later life, noting his pursuit of dialogue with the Palestinians. Negotiations continue under Israeli Prime Minister Benjamin Netanyahu, though gaps remain wide.

"He was bound to the land. He knew that the land must be protected. And he understood above all else that our existence is predicated on our ability to protect ourselves by ourselves," Netanyahu told his cabinet on Sunday after ministers stood for a minute's silence as a mark of honour.

Many Israelis will remember Sharon as a brilliant but unpredictable military leader who fought in the 1948 war of Israel's founding and, rising to general, went on to earn a reputation for trigger-happy disobedience on some occasions.

But he was also hailed in Israel for the crucial counter-attack across the Suez Canal that helped to turn the tide of the 1973 Middle East war with Egypt and Syria.

In 1983 an Israeli state inquiry found Sharon indirectly responsible for the Sabra and Shatila massacre in Lebanon and he had to resign as defence minister. But he gradually re-emerged from the political wilderness, serving as foreign minister in the late 1990s.

"The Palestinian people remember what Sharon did and tried to do to our people and their dream of forming a state," Wael Abu Yousef, a senior member of the umbrella Palestine Liberation Organisation, told Reuters.

Palestinians in Gaza handed out sweets to passersby and motorists in celebration of Sharon's passing.

"We have become more confident in victory with the departure of this tyrant (Sharon)," said Sami Abu Zuhri, spokesman for Hamas, the Islamist faction governing Gaza.

Human Rights Watch said Sharon died without facing justice for his role in the Sabra and Shatilla refugee camp massacres.

“His passing is another grim reminder that years of virtual impunity for rights abuses have done nothing to bring Israeli-Palestinian peace any closer,” said Sarah Leah Whitson, Middle East and North Africa director at Human Rights Watch.

A memorial service will be held in parliament tomorrow before an afternoon funeral at the Sharon family's Sycamore Farm. Israeli generals will serve as pallbearers.

US vice president Joe Biden travelled to Israel today and was due to deliver a eulogy for Sharon at tomorrow's service in Jerusalem.

"As Israel says goodbye to prime minister Sharon, we join with the Israeli people in honouring his commitment to his country," said US president Barack Obama.

"We reaffirm our unshakable commitment to Israel's security and our appreciation for the enduring friendship between our two countries," said Obama, whose relationship with Netanyahu has been strained by issues such as Iran's disputed nuclear programme and Israeli settlement-building on occupied land.

Palestinians also accuse Sharon of triggering their "Intifada" with a provocative visit to the al Aqsa mosque plaza in Jerusalem's Old City in 2000, a year before he was elected prime minister.

But Sharon surprised friend and foe alike by withdrawing soldiers and settlers from Gaza in 2005 under a policy of "disengagement" from conflict and a pursuit of dialogue with the Palestinians.

The pullout, however, led to Gaza's takeover by Hamas, which, unlike the West Bank-based president Mahmoud Abbas, spurns co-existence with Israel and often trades fire with it.

Sharon was also resented by many Jewish settlers who once regarded him as their champion. Israeli media quoted lawmaker Orit Strouk of the Jewish Home, an ultranationalist party in Netanyahu's coalition, as thanking God that Sharon was removed from power before he could order withdrawals from the West Bank. The remarks sparked outrage and she later apologised.

As Sharon's finance minister in 2005, Netanyahu resigned in protest at the Gaza pullout. Netanyahu points to Hamas's rise as vindication of his stance.