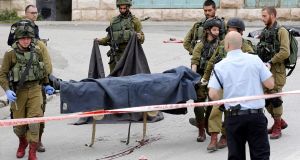 Israeli soldiers carry a body of a dead Palestinian from the scene of a shooting in Tal Rumaida in the West Bank city of Hebron on Thursday. Photograph: Abed al Hashlamoun/EPA

An Israeli soldier has been detained after video footage was released showing him apparently shooting a wounded and motionless Palestinian in the head in the flashpoint West Bank city of Hebron.

The Palestinian was one of two residents, both aged 21, who had been shot minutes earlier by troops after stabbing and lightly wounding a soldier at the entrance to Tel Rumeida, one of the Jewish settler enclaves in the largely Palestinian city.

The incident was captured on film by a local Palestinian who works as a volunteer for the Israeli B’Tselem human rights group which operates in the West Bank. The shooting took place as the wounded Israeli soldier, on a stretcher, was being transferred to an ambulance. There were at least a dozen soldiers in the area, including officers, but no one reacted to the shooting or went to assist the Palestinian as blood streamed from his head wound.

“We must not allow, even at a time that our blood boils, this loss of control. This incident will be dealt with the utmost severity.”

Army spokesman Brig Gen Moti Almoz said all the soldiers in the vicinity will be questioned.

Relatives of the arrested soldier said that because the Palestinian assailant was wearing a jacket on an extremely hot day the soldier suspected he may be wearing an explosive belt.

About 1,000 Jewish settlers live in Hebron, surrounded by some 200,000 Palestinians. The city has been one of the centres of the six-month spate of violence and security was particularly high yesterday (Thursday) as Jews celebrated the festival of Purim.

Since October, Palestinians have killed 28 Israelis and two US citizens in stabbing and car ramming attacks. Israeli forces have killed at least 190 Palestinians, 129 of whom Israel says were assailants.

It is the worst period of sustained violence in the West Bank and Jerusalem since the second Palestinian uprising ended a decade ago.

The Palestinians, along with some foreign officials, such as Swedish foreign minister Margot Wallstrom, have accused Israel of using excessive force and killing assailants who have already been stopped or wounded.

Knesset member Ayman Odeh, head of the mainly Arab Joint List, said Israel has turned in recent months “into a place in which executions are carried out in public with the encouragement of cheering mobs.”