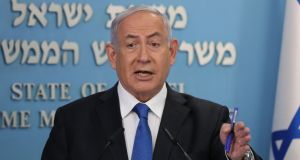 Israeli prime minister Binyamin Netanyahu: the rapprochement between Tel Aviv and the federation of sheikhdoms is a win. Photograph: Abir Sultan

The Israeli government is to “suspend” plans to annex parts of the West Bank as part of a US-brokered deal between Israel and the United Arab Emirates announced on Thursday.

The two states will open diplomatic relations for the first time, with the UAE becoming the first Arab state in the Gulf to recognise Israel.

Later he told reporters that the relationship between Israeli prime minister Binyamin Netanyahu and Emirati crown prince Mohammed bin Zayed was “like love” – “ a tremendous relationship that’s been built up over the last year”.

Israel and the UAE – which have been increasingly aligned in recent years over their shared hostility to Iran – agreed to open diplomatic missions, introduce direct flights, and develop investment and technology links. Detailed negotiations between the two sides will now begin. Both countries are traditional allies of the United States in the region.

While the rapprochement between Tel Aviv and the federation of sheikhdoms is a win for Mr Netanyahu, who had been seeking to build Arab allies across the Middle East, his decision to back away from annexation of Palestinian lands reflects growing international pressure on the Israeli government.

His government had pledged to expand into swathes of Palestinian-controlled territories as part of a coalition deal signed off this year.

Several prominent Palestinian voices criticised the deal, named the “Abraham Accords”, accusing the UAE of selling out to Israel.

The agreement gives Mr Trump the opportunity to tout a foreign policy win, less than three months before November’s presidential election. He said he expected more Arab and Muslim countries to follow the UAE’s lead “now that the ice has been broken”.