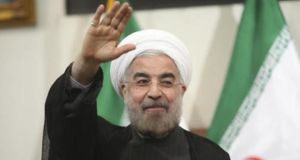 Two days before his inauguration as Iran’s new president, Hassan Rouhani said that Israeli occupation of Palestinian land had inflicted a “wound” on the Muslim world, according to a segment of his remarks broadcast on Iran’s state-run Press TV.

An earlier report by Iran’s student news agency ISNA had quoted Mr Rouhani as saying: “The Zionist regime is a wound that has sat on the body of the Muslim world for years and needs to be removed.”

Press TV then broadcast an excerpt from an exchange between Mr Rouhani and journalists at a rally to mark Iran’s annual Al Qods Day in support of the Palestinians.

“After all, in our region there’s been a wound for years on the body of the Muslim world under the shadow of the occupation of the holy land of Palestine and the beloved al-Qods (Jerusalem),” Mr Rouhani said in the segment.

Israeli prime minister Benjamin Netanyahu seized on ISNA’s version of Mr Rouhani’s comments, saying they showed the reputedly moderate Iranian cleric was as hostile to Israel as Mr Ahmadinejad, whose denial of the Holocaust and description of Israel as a “cancerous tumour” prompted condemnation.

The United States and its allies suspect Iran of seeking a nuclear weapons capability. Tehran says its nuclear programme is purely for peaceful purposes, but Israel regards it as a threat to its existence and refuses to rule out military action.

With a more pragmatic president in Iran, Western countries may see a better chance for diplomacy to lead to a deal to curb Tehran’s uranium enrichment programme and avoid any conflict.

“The true face of Rouhani has been revealed sooner than expected. Even if they hurry to deny his words - this is what the man thinks and this is the Iranian regime’s plan of action,” Mr Netanyahu said in a statement.

Mr Rouhani’s words “must awaken the world from the illusion in which part of it is placed since the Iranian elections”, he declared, saying Iran still aimed “to acquire nuclear weapons in order to threaten Israel, the Middle East and world peace”.

“A nation that threatens to destroy the state of Israel must not be allowed to have weapons of mass destruction,” he said.

Mr Ahmadinejad addressed Israel on Qods Day in his last speech as president. “You planted wind in our region and you will reap the storm. I swear to God that a ferocious storm is coming and it will uproot the Zionist entity,” Iran’s state news agency IRNA quoted him as saying.