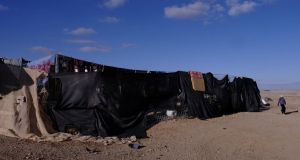 Anyone travelling in the Negev desert in the south of Israel cannot fail to notice the clusters of makeshift shacks dotted alongside the road, invariably with goats grazing close by.

The ramshackle structures belong to semi-nomadic Israeli Bedouins and the number of illegal clusters grows each year, posing a serious problem in a country where undeveloped land is a scarce resource.

Bedouins are known for their rich oral poetic tradition, their tribal lifestyle and their code of honour. The communities enjoy extensive kinship networks, providing them with community support and the basic needs to survive, along with a rich culture.

However, the trend towards increasing urbanisation and modernisation in recent decades has posed significant challenges to the traditional, tribal lifestyle.

Despite generous financial incentives, plans by the Israeli government to relocate the Bedouins into a number of designated urban communities with modern-day infrastructure have been met with only partial success. The random Bedouin clusters continue to expand across large swathes of the Negev desert, which makes up more than 55 per cent of the area of Israel.

Atiyeh al-Asam, the head of the Committee of Unrecognised Villages in the Negev, describes the establishment of the state of Israel in 1948 as a disaster for the Bedouins and says the years since have been characterised by an ongoing struggle over the land.

“We are 30 per cent of the population of the Negev but live on less than 3 per cent of the land,” he says. “Now Israel wants to take another 2 per cent and leave us with only 1 per cent.”

Large families are the norm, and the government turns a blind eye to widespread cases of polygamy, which is illegal in Israel. Wives – including underage teenagers – are often smuggled into Israel from Gaza or the West Bank and sometimes Egypt.

Women’s groups have criticised the practice that when a Bedouin man takes a second or subsequent wife, he leaves his first wife to fend for herself with no means of supporting herself and her children. She cannot get divorced due to cultural shame, nor can she remarry.

The Bedouins are Israeli citizens, and a small percentage enlist in the Israeli army, distinguishing themselves as expert trackers.

Attempts by Israel to regulate Bedouin claims to the land have been largely unsuccessful: such claims are traditionally based on verbal agreements between neighbours or adjoining tribes over grazing rights and in the absence of written documentation are not recognised by Israeli courts. “We don’t own the land: the land owns us,” is a traditional Bedouin saying.

About 150,000 members of the community live in one of 18 recognised urban settlements, where schools and health facilities are provided by the government along with modern utilities. However, efforts to persuade the rest of the Bedouin population to relocate from the shanty towns and tent villages to the designated communities have met with only partial success.

Naomi Kahn, from the right-wing Israeli NGO Regavim, blames the lack of resolve from Israeli governments for the failure to bring an end to the question of land ownership in the Negev.

“The state of Israel gives free land and massive relocation packages [€63,000] in order for the Bedouin to agree to obey the law but they know if they wait the offer will get better. It’s an absurd situation and it’s destroying Israel’s ability to plan for the future and create normal life for anyone in the Negev and to properly allocate our resources.”

Al-Asam has a different viewpoint. He claims that Israel has destroyed 10,000 Bedouin homes in the past five years.

“There’s a double standard here,” he says. “Jewish communities with a small number of families are granted recognition by the state but some Bedouin communities with 10,000 residents are classified as illegal. We have to find a solution that takes Bedouin culture and tradition into consideration in the same way the government respects kibbutzim and Jewish farms.”

The population growth among the Bedouins is among the highest in the world. The community doubles in size approximately every 15 years.

Drug smuggling across the Egyptian border using camels is another ongoing problem. The camels are known to have been taught to walk the same route so a successful drug bust often results in the capture of a camel loaded with sacks of drugs without the drug smugglers being apprehended.

Bedouin-owned camels have also been involved in a number of traffic accidents in recent years – some of them fatal – but a law requiring camel owners to register the animals has not been implemented.

Kahn accuses the government of turning a blind eye to such lawlessness, which he says has turned the Negev into the Wild West.