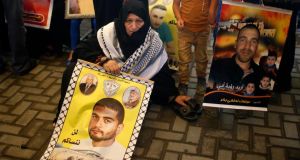 A Palestinian woman holds a poster depicting her jailed son during a protest calling for the release of Palestinian prisoners from Israeli jails in Gaza City today. Photograph: Mohammed Salem/Reuters.

Israel has today named 26 Palestinian prisoners to be freed this week under a deal enabling US-backed peace talks to resume.

Palestinians said the talks had been undermined by newly announced plans to expand Israeli settlements on the West Bank.

Some Israelis reacted angrily to the scheduled release of the long-term Palestinian prisoners, which is likely to take place tomorrow or Wednesday.

“Shame on the government and shame on the prime minister and his supporters,” Zvia Dahan, whose father, Moshe Becker, was killed while tending his orange grove in Israel in 1994, wrote on Facebook. One of Becker’s three killers is to be freed.

The 26 prisoners are the first of a total of 104 Israel has decided in principle to free as part of an agreement reached after intensive shuttle diplomacy by US secretary of state John Kerry to renew talks for Palestinian statehood.

Israel sweetened the deal for far-right members of its governing coalition yesterday by announcing plans to build 1,187 new dwellings for Jewish settlers in the occupied West Bank and parts of the territory it annexed to Jerusalem after the 1967 Middle East war.

“The international community must stand with this peace process and must stand shoulder to shoulder with us and hold Israel accountable for its continuing settlement activities,” Palestinian chief negotiator Saeb Erekat said.”Those who do these things are determined to undermine the peace negotiations, are determined to force people like us to leave the negotiating table.”

Mark Regev, a spokesman for prime minister Binyamin Netanyahu, dismissed the criticism, saying the new construction would take place in areas Israel intends to keep in any future peace agreement.”This in no way changes the final map of peace. It changes nothing,” he said.

Some 500,000 Israeli settlers live in the West Bank and East Jerusalem amid 2.5 million Palestinians. Israel withdrew in 2005 from the Gaza Strip, which is now governed by Hamas Islamists opposed to permanent co-existence with the Jewish state.

Peace negotiations were suspended three years ago in a dispute over continued settlement building. They reconvened in Washington on July 30th, with a second round due in Jerusalem on Wednesday and later in the West Bank.

Few expect the talks to resolve core issues that have defied solution for decades, such as borders, the future of settlements, the status of Jerusalem and the plight of Palestinian refugees scattered around the region.

The decision to free the 26 prisoners, regarded as heroes by Palestinians and jailed as murderers by Israel between 1985 and 1994, was made late on Sunday.

“Work continues for the release of all prisoners, and their case will remain the top priority of the Palestinian leadership,” Abbas was quoted as saying on the official WAFA news agency.

A list of the prisoners, along with the names of the people they were convicted of killing, was published by Israel’s Prisons Service as part of a process in which opponents of their release have 48 hours to appeal to the High Court. Based on past decisions, the court is widely expected not to intervene.

Fourteen of the prisoners going free will be deported or sent to the Gaza Strip, and 12 to the West Bank. Two of the prisoners would have served out their sentences in another six months, and six others over the next three years.

Israel has a number of times freed Palestinians before they served out their time, but mostly in swaps for Israeli soldiers or their remains held by the Jewish state’s enemies.