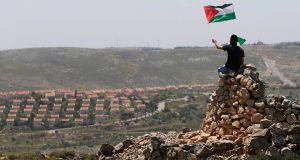 Israeli soldiers evicted several hundred Bedouins from a village in the occupied West Bank today after the army declared the area a live-fire training zone.

The residents of Wadi al-Maleh, a village mostly inhabited by shepherds in the arid area bordering Jordan, had almost all left their homes by an evening curfew and retreated to neighbouring villages, Aref Daraghmeh, a local leader said.

The displacement coincided with several demolitions of Arab properties in the West Bank and East Jerusalem, which come as the United States is trying to revive stalled peace.

In January, villagers received a similar eviction order and left without resisting, only to return after 48 hours. Almost all of their 90 buildings, including shelters for their animals, were demolished in 2010, local rights groups said.

Israeli troops prevented outsiders, including journalists, from accessing the area saying it was a "closed military zone".

The military did not respond to a request for comment. Wadi al-Maleh is located in "Area C," a swath of land making up two-thirds of the West Bank under full Israeli control and where most Jewish settlements are located.

Half a million settlers live in the occupied West Bank and East Jerusalem, territory captured in the 1967 Middle East War which Palestinians want for a future state.

Israeli army firing zones comprise 18 per cent of the West Bank, roughly the same size of "Area A," the land including major cities and towns which is under full Palestinian control.

According to the UN Office for the Co-ordination of Humanitarian Affairs (OCHA), 5,000 Palestinians in 38 herding communities live on army firing zones, along with several sprawling Jewish settlements and farms.

Besides al-Maleh, 12 Bedouin villages throughout the length of the Jordan Valley have received eviction orders since 1999, according to the Association for Human Rights in Israel.

The International Court of Justice and most governments deem Jewish settlements in the West Bank illegal. Israel disputes this and cites Biblical and historical links to the land.

The army also demolished a well near a Palestinian refugee camp south of the city of Hebron and cleared an agricultural area of dozens of olive trees east of Bethlehem, according to Palestinian government media. Israeli officials did not immediately respond to requests for comment.