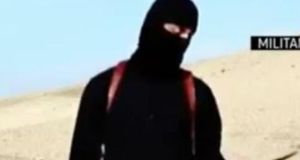 Islamic State executioner “Jihadi John” has been identified as a London-based computer programming graduate in a number of reports.

The IS militant has been named by friends and others familiar with the case as Mohammed Emwazi, according to the Washington Post and BBC.

British radicalisation experts said they believed the reported identity to be “accurate and correct”.

The British government and police refused to confirm or deny his identity, saying it was an ongoing security investigation.

Two US government sources told reporters that “John” was believed by investigators to be Emwazi, a fluent Arabic speaker from a well-to-do family from Kuwait who grew up in west London and graduated from the University of Westminster with a degree in computer programming.

The man nicknamed “Jihadi John” rose to notoriety after he first appeared in a video posted online last August, in which he appeared to kill the American journalist James Foley.

A statement from the International Centre for the Study of Radicalisation (ICSR) at King’s College London said: “We believe the identity and name published by the Washington Post and now in the public realm to be accurate and correct.”

Dressed all in black with a balaclava covering all but his eyes and the ridge of his nose and a holster under his left arm, “Jihadi John” reappeared in videos of the beheadings of US journalist Steven Sotloff, British aid workers David Haines and Alan Henning, and American aid worker Peter Kassig.

The militant last month appeared in a video with the Japanese hostages Haruna Yukawa and Kenji Goto, shortly before they were killed.

A Washington Post article was the first to claim that “Jihadi John” is Emwazi, who it says travelled to Syria around 2012 before later joining Isis, which has taken control of large swathes of the conflict-torn country, as well as territory in neighbouring Iraq.

The article claims Emwazi started to radicalise after a planned safari in Tanzania following his graduation from the University of Westminster was brought to an abrupt end when he was detained on arrival in Dar es Salaam and deported the following day.

It is claimed that he told friends he was flown to Amsterdam where an officer from MI5 accused him of trying to reach Somalia, where the militant group al-Shabab operates.

According to the article, in 2009/2010, Emwazi decided to move to Kuwait, where he told friends he had a job and marriage waiting for him - but was prevented from travelling there by UK counter-terrorism officials.

Released hostages have told officials that “Jihadi John” was part of a team guarding Western captives at a prison in Idlib, Syria, in 2013. He was joined by two other men with British accents, including one who was dubbed “George”.

Scotland Yard has refused to confirm the reports.

Downing Street also declined to confirm or deny that the reported name was known to the intelligence and security services.

Asked if David Cameron was concerned about Emwazi’s name being reported, a No 10 spokeswoman said: “The Prime Minister would be concerned about information being put into the public domain at any time that might jeopardise ongoing police or security investigations or the safety of British citizens.”

Security officials are said to be unhappy that the name had been leaked.

Asim Qureshi, the research director of charity Cage, which had worked with Emwazi since 2009, said that although he could not be certain Emwazi was “John”, there were some “striking similarities”.

Cage, which campaigns for those detained on terrorism charges, said Emwazi had got in touch with the organisation saying he had been harassed by British security services after trying to take a trip back to Kuwait in 2010.

“I feel like a prisoner, only not in a cage, in London,” he wrote in an email to Cage at the time.

Cage blames Emwazi’s radicalisation on alleged harassment by counter-terrorism officials after he was detained in Tanzania in 2009.