Islamic State in retreat in Palmyra as key leader ‘killed’ 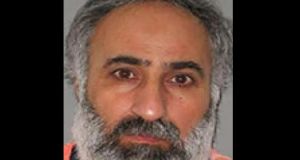 Abd ar-Rahman Mustafa al-Qaduli, a senior Islamic State leader in charge of the group’s finances as well as some plots and external affairs. Photograph: handout/AFP/Getty Images 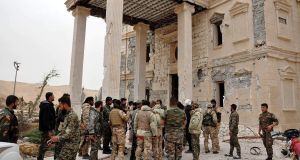 Islamic State fighters were on the retreat in the strategic Syrian city of Palmyra on Friday, as the United States said it probably killed several senior leaders of the militant group this week including its top finance officer.

The double blow to the hardline Islamist group, also known as Isis, in its self-declared caliphate, which covers huge areas of Syria and Iraq, came three days after Islamic State suicide bombers killed 31 people in Brussels.

Syrian soldiers fighting to retake the desert city of Palmyra from Islamic State forces recaptured its old citadel on Friday, various media reported. The citadel overlooks some of the most extensive ruins of the Roman empire.

The recapture of Palmyra, which the Islamist militants seized in May 2015, would mark the biggest reversal for Islamic State in Syria since Russia’s intervention turned the tide of the five-year conflict in President Bashar al-Assad’s favour.

The city controls routes east into the heartland of territory held by the militants, including the province of Deir al-Zor and the Islamic State’s de facto capital in Raqqa.

The Syrian Observatory for Human Rights monitoring group said yesterday an Islamic State leader was killed when his car was targeted in a strike on Raqqa on Thursday night.

It did not identify the dead militant, but US defence secretary Ash Carter said the group’s top finance officer and other senior leaders were likely killed this week in a major offensive targeting its financial operation.

Mr Carter said the United States believed it killed Haji Iman – an alias for Abd ar-Rahman Mustafa al-Qaduli, a senior Islamic State leader in charge of the group’s finances as well as some plots and external affairs.

“We are systematically eliminating Isil’s cabinet,” Mr Carter told reporters at a briefing at the Pentagon, using an acronym to refer to the group.

US officials said they were helping Iraqis prepare for a major operation in Mosul to take back more territory from the militant group.

The scale of Friday’s fighting for Palmyra reflected how much of a strategic prize the city represents, with jets launching dozens of air strikes and soldiers firing mortar barrages, while Islamic State fighters hit back with two car bombings.

Russian warplanes have continued to back up the Syrian army and its allies, despite Moscow’s recent announcement that it was withdrawing the bulk of its military forces.

Its aircraft carried out 41 sorties between Tuesday and Thursday in support of the Palmyra offensive and destroyed 146 targets, Russian news agencies reported on Friday, citing the Russian defence ministry.– (Reuters)