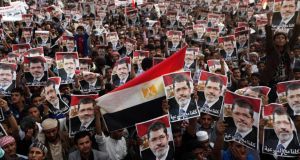 Supporters of deposed Egyptian president Mohamed Morsi hold up his photo during a march to show solidarity with his supporters in Egypt, in Sana’a, Yemen, yesterday. Photograph: Reuters

The ongoing struggle for Egypt is not, fundamentally, for the presidency or seats in parliament but for the souls of its people, its polity, and its very existence as a country.

The Muslim Brotherhood bases its right to rule on a mandate from heaven and seeks to turn the Egyptians into devout Muslims following a path dictated by the tenets of Islam and senior movement figures. Following the fall of president Hosni Mubarak, Brotherhood leaders and members believe heaven decreed that 2011 was the designated time for the 83-year-old Brotherhood to take power.

Consequently, when the Brotherhood won control of both houses of parliament and the presidency, the movement, claiming exclusive mandates from both heaven and the people, proceeded to impose its will on the country and its citizens, drafting a constitution with a fundamentalist bias and appointing loyalists to key posts in the administration and the provinces.

This became all the more obvious after the Brotherhood’s Mohamed Morsi was inaugurated as president in June last year. The Brotherhood’s attitude was, “Since we won the elections, we rule.” Dialogue with figures and factions outside the fundamentalist ambit was not possible.

The Brotherhood leadership’s aim is to transform Egypt into its version of an “Islamic state” based on the model of the form of government established by the Prophet Muhammad at Medina in the 7th century. Muslim canon law, Sharia, would become the law of the land, and religious ideologues would dictate morals and social practices. Male Muslims would be first-class citizens while women would have their place at home in the kitchen. And Christians and Jews, whose faiths are recognised in Islam, would be “protected”.

The democracy project would be shelved.

Furthermore, the Brotherhood and the ultraorthodox Salafis argue that Egypt should cease existing as a nation state and dissolve itself into an Islamic caliphate extending from the Atlantic to the Gulf.

Compromise difficult
While it holds this view the possibilities of compromise by the Brotherhood with Egyptians who insist that their country must survive, remain a “civil” state and become a multiparty, pluralistic democracy where everyone is a citizen with equal rights are extremely limited. The use of the term “civil” amounts to a genuflection to the Brotherhood and the Salafis who believe “secular” means Godless.

To accommodate the fundamentalists, Egyptians in the “civil” camp are prepared to make compromises, such as calling Egypt’s polity a “civil” rather than a “secular” state and including provisions in the constitution designating Islam as the state religion and specifying that the president must be a Muslim.

Brutal crackdown
Wednesday’s brutal crackdown on Brotherhood sit-ins in Cairo and on protests elsewhere took place under the command of armed forces chief and defence minister Abdel-Fattah El-Sisi, who comes from a Brotherhood family and was appointed by Morsi. But the units participating were not from the army, they belong to the police commandos, police, and the Mubarak-era plain clothes security apparatus. Sisi made it clear that army personnel would not be used for street fighting but would hold strategic positions at ministries and on highways and bridges.

The Brotherhood is not blaming the army but Sisi personally, whose resignation and trial the movement is demanding. According to an Egyptian source with close military connections, the Brotherhood does not want to alienate the armed forces, Egypt’s key state institution, particularly since the rank-and-file consists of conscripts, many of whom are sons of Brotherhood supporters.

Army role
Sisi says he does not seek power or want the military to return to power but, the source said, the army staff is divided with some officers pressing for the resurrection of the army’s role as eminence grise. However, since the 1952 coup that brought it to power, the army has grown weaker and weaker, less and less able to rule, the source said.

Furthermore, in the 2½ years since Mubarak was overthrown, Egypt has moved beyond authoritarian military men. Egyptians expect the new constitution to be democratic and inclusive and the new parliament and president to deliver the needs and demands of the people at large. If they don’t, Tahrir Square remains a democratic option.