‘There is no army in the world that can withstand the soldiers of Islam,’ group says 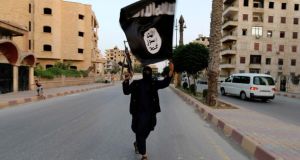 A member loyal to Isis waves a flag of allegiance to the militant group, in Raqqa. Photograph: Reuters

Islamist militants, who have declared an Islamic “caliphate” in an area straddling Iraq and Syria, trumpeted the declaration in several videos.

One slick video, mostly in English, features a bearded fighter with an AK-47 on his back, explaining the new caliphate. “This is not the first border we will break, we will break other borders,” a jihadist from the Islamic State in Iraq and Syria (Isis), also known as the Islamic State in Iraq and the Levant, warned in the video called End of Sykes-Picot, a reference to the agreement between France and Britain that divided up the Ottoman empire territories after the first World War.

Later the fighter pledges that jihadists will free Palestine. “We are not here to replace an Arab cahoot with a western cahoot. Rather our jihad is more lofty and higher. We are fighting to make the word of Allah the highest,” the spokesman said.

“There is no army in the world that can withstand the soldiers of Islam,” he said.

The video features about a dozen men in a cell said to be captured troops and border police. A building, said to be a police station, is shown being blown up, as well as US-made Humvees captured from the border police. “Look how much America spends to fight Islam, and it ends up just being in our pockets,” the spokesman taunted.

Isis, a breakaway group from al-Qaeda, is notable for its hardline anti-Shia sectarianism, declaring Shia Muslims and other rivals as heretics that deserve death.

Abu Mohammed al-Adnani, an Isis spokesman, defined the Islamic state’s territory as running from northern Syria to the Iraqi province of Diyala northeast of Baghdad, a vast stretch of land straddling the border that is already largely under Isis control. He also said that with the establishment of the caliphate, the group was changing its name to the Islamic State, dropping the mention of Iraq and Syria or the Levant.

“The legality of all emirates, groups, states and organisations becomes null by the expansion of the caliph’s authority and the arrival of its troops to their areas,” he said in an audio statement posted online, AP reported. “Listen to your caliph and obey him. Support your state, which grows every day.”

Adnani said the group’s chief, Abu Bakr al-Baghdadi, was the leader of the new caliphate and called on Muslims everywhere, not just those in areas under the organisation’s control, to swear loyalty to him.

Baghdadi has been disowned by al-Qaeda’s leader, Ayman al-Zawahiri, after he ignored Zawahiri’s demands that the Islamic State leave Syria.

Since the Ottoman collapse, Sunni Islam has lacked an internationally recognised clerical hierarchy and senior figures generally hold authority within a single country. Among the most prominent of these is the grand mufti of Egypt, whose spokesman dismissed the new caliphate in Iraq and Syria as an “illusion”.

“What they called the Islamic caliphate is merely a response to the chaos which has happened in Iraq as a direct result of the inflammation of sectarian conflict in the entire region,” Ibrahim Negm said in Cairo.

An analyst said the declaration of a caliphate by Isis posed a huge challenge to al-Qaeda.

“While it is now inevitable that members and prominent supporters of al-Qaeda and its affiliates will rapidly move to denounce Baghdadi and this announcement, it is the long-term implications that may prove more significant. Taken globally, the younger generation of the jihadist community is becoming more supportive of Isis, largely out of fealty to its slick and proven capacity for attaining rapid results through brutality.” – (Guardian service)