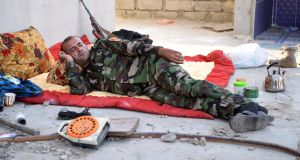 A Kurdish Peshmerga soldier relaxes in Bartella, a village recaptured from Islamic State during the battle to retake Mosul, on Tuesday. Photograph: Carl Court/Getty Images 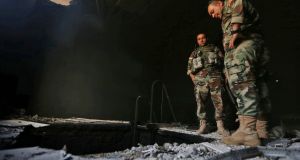 Kurdish Peshmerga forces inspect a tunnel in a building in Shaqouli village, about 35km east of Mosul, on Tuesday, after they had recaptured it from Islamic State Photograph: Safin Hamed/AFP/Getty Images

Residents of Mosul said Islamic State was using civilians as human shields as Iraqi and Kurdish forces captured outlying villages in their advance on the jihadists’ stronghold.

The leader of Islamic State, also known as Isis, was reported to be among thousands of hardline militants still in the city, suggesting the group would go to great lengths to repel the coalition.

With attacking forces still between 20 and 50km away, residents reached by telephone said more than 100 families had started moving from southern and eastern suburbs most exposed to the offensive to more central parts of the city.

Islamic State militants were preventing people fleeing Mosul, they said, and one said they directed some towards buildings they had recently used themselves.

“It’s quite clear Daesh has started to use civilians as human shields by allowing families to stay in buildings likely to be targeted by air strikes,” said Abu Mahir, who lives near the city’s university, using an alternative name for the Islamic State terror group.

Like other residents contacted in the city, he refused to give his full name, but Abdul Rahman Waggaa, a member of the exiled Provincial Council of Nineveh of which Mosul is the capital, corroborated his account to Reuters.

The fall of Mosul would signal the defeat of the ultra-hardline Sunni jihadists in Iraq but could also lead to land grabs and sectarian bloodletting between groups which fought one another after the 2003 overthrow of Saddam Hussein.

In Washington, Pentagon spokesman Captain Jeff Davis told reporters that it was known that civilians were being used as human shields.

“This has been going on for several weeks where we’ve seen civilians being forcibly detained and their movements being prevented where they can’t get out of Mosul. They are being held there against their will,” he told reporters.

Davis described the operation to retake Mosul as “an ugly fight”, adding: “But I will tell you we’ve seen very good progress. It’s day one, don’t get your hopes up, it’s going to be a while.”

About 1.5 million people still live in Mosul and the International Organisation for Migration said Islamic State may use tens of thousands of residents as human shields to hold onto their last city stronghold in Iraq.

The IOM said there was a likelihood of chemical attacks by the jihadists, who had used such weapons previously against Iraqi Kurdish forces. Iraqi Prime Minister Haider al-Abadi said safe routes had been secured for civilians who wanted to leave Mosul and it was the duty of the US-led coalition to prevent Islamic State fighters from escaping into nearby Syria.

The Syrian army, meanwhile, accused the coalition of planning to allow Islamic State militants to flee across the border.

US president Barack Obama said it would be a difficult fight but Islamic State “will be defeated in Mosul”. Mr Obama is hoping to bolster his legacy by seizing back as much territory as he can from Islamic State before he leaves office in January.

The Iraqi army and Peshmerga forces from autonomous Iraqi Kurdistan began moving towards the city at dawn on Monday under air cover from a U.S.-led coalition set up after Islamic State swept into Iraq from Syria in 2014.

Hoshiyar Zebari, a senior Kurdish official, said initial operations succeeded due to close co-operation between the Iraqi government and Kurdish peshmerga fighters, allowing them to clear Islamic State from 9 or 10 villages east of Mosul.

“Daesh is disoriented they don’t know whether to expect attacks from the east or west or north,” he told Reuters.

On Tuesday attacking forces entered another phase, Zebari said. “It won’t be a spectacular attack on Mosul itself. It will be very cautious. It is a high-risk operation for everybody.”

Islamic State leader Abu Bakr al-Baghdadi, and explosives expert Fawzi Ali Nouimeh were both in the city, according to what Zebari described as “solid” intelligence reports.

A total of 20 villages were taken from the militants east, south and southeast of Mosul by early Tuesday, according to statements from the two forces, fighting alongside one another for the first time.

Islamic State said on Monday its fighters had targeted the attacking forces with 10 suicide bombs and that their foes had surrounded five villages but not taken them. None of the reports could be independently verified.

Mr Abadi announced the offensive on Monday around two years after Iraq’s second-largest city fell to the militants, who exploited the civil war that broke out in Syria in 2011 to seize territory there.

The operation had been planned since July with US and other coalition forces and Western and Iraqi officials, mindful of the civil war that followed Saddam’s fall, say plans for administering the mainly Sunni city and accommodating those who flee the fighting are in place.

The United Nations has said up to a million people could flee the city and that it expected the first big wave in five or six days, indicating fighting would reach the city then.

But some residents said Islamic State was making sure people did not leave. One, who gave his name as Anwar, said he fled the Sumer district near Mosul airport, fearing ground forces and aerial bombing.

“I told Daesh fighters at a checkpoint ‘I’m going to stay at my sister’s house’,” he said. “A Daesh fighter made calls through his radio to make sure I was not lying and only after the voice on the other side said: ‘Let him go’, did I let myself breathe.”

Fighting is expected to take weeks, if not months, as 30,000 government forces, Sunni tribal fighters and Kurdish Peshmerga first encircle the city then attempt to oust between 4,000 and 8,000 Islamic State militants.

More than 5,000 US soldiers are also deployed in support missions, as are troops from France, Britain, Canada and other Western nations.

The Iraqi army is attacking Mosul on the southern and southeastern fronts, while the Peshmerga carried out their operation to the east and are also deployed north and northwest.

The Kurdish forces said they secured “a significant stretch” of the 80km road between Erbil, their capital, and Mosul, about an hour’s drive to the west.

Coalition warplanes attacked 17 Islamic State positions in support of the Peshmerga operation in the heavily mined area, the Kurdish statement said, adding that at least four car bombs were destroyed.

There was no indication of the number of military or civilian casualties in the Iraqi or Kurdish statements.

France said it would co-host a multilateral meeting with Iraq on Oct. 20 to discuss how to stabilise Mosul and its surroundings once Islamic State has been defeated. Foreign Minister Jean-Marc Ayrault said the militants were likely to retreat to their Syrian bastion Raqqa, so it was vital to consider how to retake that city too.