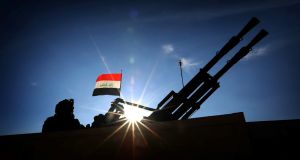 Iraqi troops stand guard at the entrance of the Nineveh base for liberation operations in Makhmur, about 280 kilometres (175 miles) north of the capital Baghdad. Photograph: Safin Hamed/AFP/Getty Images

Iraq’s military is mobilising troops to prepare for an offensive the government has pledged to launch this year to retake the northern city of Mosul from Islamic State.

Defence Minister Khaled al-Obaidi told Reuters last month that Iraq would launch the Mosul operation in the first half of the year and Prime Minister Haider al-Abadi has said 2016 would see the “final victory” against the militants.

Some US officials have endorsed that assessment, but a senior US intelligence officer told Congress this week any operation to retake Mosul would be long and complex and unlikely to finish this year.

With more than a million people still living there, Mosul is the largest city controlled by Islamic State, which declared a ‘caliphate’ in swathes of territory it seized in Iraq and neighbouring Syria in 2014.

Retaking it would be a huge boost for Iraqi forces who, backed by air strikes from a US-led coalition, reclaimed the western city of Ramadi from Islamic State in late December.

Mosul, however, is a far larger city with a populace made up of many sects. And in Ramadi, Iraqi forces are still working to secure that city and its environs.

Iraq’s Rasool told Reuters on Friday that troop movements south of Mosul were being coordinated with the peshmerga, the armed forces of the autonomous Kurdish region north and east of Nineveh which are expected to join the campaign.

“Once we complete all the preparations, we will officially announce the date for the start of Mosul operations,” he added.

The United States, which is leading an international campaign in both Iraq and Syria to defeat the jihadist group, has said its strategy is to regain territory at the heart of Islamic State’s cross-border state, take Mosul and the Syrian city of Raqqa, and destroy the confidence of its fighters that it can expand as a magnet for jihadis.

Iraq’s army, weakened by years of corruption and mismanagement following the US-led invasion in 2003, is trying to rebuild itself after collapsing 18 months ago in the face of Islamic State’s lightning advance.