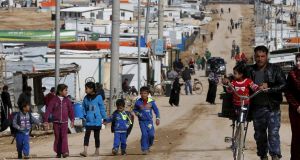 International aid organisations are on Thursday set to present to a London summit, entitled Supporting Syria and the Region, a new strategy for dealing with the Syrian war and its impact on neighbouring countries.

“In previous years we focused on just the humanitarian component while responding to this crisis, but now we have adopted a much bigger approach,” Irishman John Ging, operations chief of the United Nations Office for the Co-ordination of Humanitarian Affairs, told The Irish Times on the sidelines of the Syrian peace talks in Geneva.

This involved educating Syria’s children, providing livelihoods for homeless and jobless Syrians and supporting refugee host countries where educational and health facilities had been severely strained and development impaired by the influx of millions of Syrians, he said.

The donor summit has called for $7.73 billion (€7.02 billion) for assistance to 13.5 million Syrians in need, and $1.23 billion to aid regional host countries. The funds will be allocated to a range of UN and other agencies.

The smaller sum will be used to build infrastructure, schools, hospitals, and other facilities to serve both Syrians and the citizens of host countries which, Mr Ging said, had been “challenged overnight by the influx of refugees”, particularly Lebanon, where Syrians constitute a quarter of the population.

Ireland is to be represented by Minister of State for Foreign Affairs Seán Sherlock.

Mr Ging deplored donors’ failure to meet previous targets. “We have had only 50 per cent [of targeted funding] and that means we have been meeting only 50 per cent of the most urgent needs,” he said. This had resulted “in hunger, loss of life because we do not have enough medicine. Children are not being vaccinated, causing outbreaks of preventable diseases.

“Mobilisation of new funding for education and other activities cannot come at the expense of food and medicine,” he said. “Many children have lost four years of education.” A goal of the London meeting was to provide schooling for all Syrian refugee children by the end of the 2016/17 academic year.

The funding shortfall, he said, “compounds the suffering of people already in mortal danger, people who have had their lives and livelihoods destroyed”. The international community must not “feel fatigued by the duration of this conflict but energised by our responsibilities”, he added.

Ireland had consistently been very generous not only during this crisis but in terms of global humanitarian action, he said. “Ireland is the 10th-largest donor to the UN emergency response fund as well as to humanitarian organisations operating in the Syrian crisis.” Considering countries “by wealth and by generosity”, Ireland “would not be in the G20 of wealth but in the G20 of generosity”.

Lebanon’s prime minister Tammam Salam and Jordan’s King Abdullah are attending the summit to make it clear that their countries cannot host more Syrian refugees. Lebanon – which is home to two million UN-registered and unregistered Syrians – permits entry only to Syrians who transit through the airport, obtain visas, or require health care.

Jordan – which has 1.27 million Syrian refugees – has 16,000 Syrians stranded at the border. King Abdullah warned in a BBC interview this week that his people could not accept any more refugees, having also taken in many Palestinians and Iraqis.

Turkey, where 2.5 million Syrians have registered as refugees and hundreds of thousands more are residing among 78 million Turks, has introduced visas to slow the flow. Ankara claims it has spent $6 billion (€5.4 billion) on the refugees.