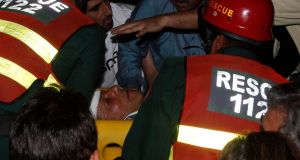 Rescue workers carry Imran Khan, who is chairman of political party Pakistan Tehreek-e-Insaf, after he fell from a makeshift elevator during his election campaign rally in Lahore. Photograph: Mohsin Raza/Reuters.

Pakistani cricketer-turned-politician Imran Khan injured his head after falling off a mechanical lift raising him onto a stage at a rally today, four days before national elections.

Mr Khan fell as the lift was just short of the 15ft (4.5 metre)-high platform in the eastern city of Lahore, witnesses said.

Television footage showed the dazed leader of the Pakistan Tehreek-e-Insaf (PTI) party being led away to hospital with blood on his head.

“He is not in any danger ... He is having tests but his injuries seem minor,” said party spokesman Shafqat Mahmood.

“Imran has a head injury but he is stable, talking and recognising people. We will conduct some tests and further examination,” the head of Shaukat Khanum Cancer Hospital, Dr Faisal Sultan, told journalists.

Mr Khan’s PTI is not expected to win the May 11th poll but could be a major partner in a coalition government. He has promised to cut down on tax evasion and corruption that have bled Pakistan’s treasury dry.

Mr Khan was part of a Pakistani team that won the cricket World Cup in 1992.

His political party has had a marginal showing in previous polls but has benefited from a groundswell of support this year, especially from young, urban voters fed up with the country’s corruption.