Up to 1,400 captives to be traded in wake of fighter plane downing and village bombing 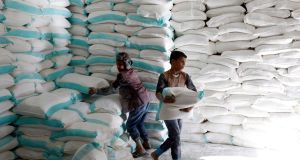 After more than a year of battling and bickering, Yemen’s Houthi rebels and the Saudi-sponsored government have decided to implement a large-scale prisoner exchange arranged in Sweden in December 2018.

The agreement followed a spike in fighting that climaxed when Houthi anti-aircraft missiles brought down a Saudi fighter plane in recent days and the Saudis retaliated by bombing a northern village, killing 31 including women and children.

Despite the upsurge in violence, a week of intensive talks in Jordan yielded the breakthrough on the prisoner deal. The United Nations mission said this would be the “first official large-scale” prisoner swap since the war began in March 2015.

UN envoy Martin Griffiths said “the parties showed us that even with the growing challenges on the ground, the confidence they have been building can still yield positive results”. He urged the parties to carry out the exchange “with the utmost sense of urgency” but did not say when it would begin.

While numbers were not disclosed by the UN, rebel official Abdel Qader al-Murtaza tweeted that in the first phase more than 1,400 prisoners would be released by the two sides. The final lists were being prepared and revised, he stated.

Meanwhile, the UN, in a report published last week, says the humanitarian crisis in Yemen remains “the worst in the world”. More than 4.3 million Yemenis are homeless and 24 million people, 80 per cent of the population, are in urgent need of aid, said the report by the UN Office for the Co-Ordination of Humanitarian Affairs. It said the country, the poorest in the region, was on the “brink of widespread famine and economic collapse”.

During a meeting in Brussels called by the European Commission and Sweden last week, aid agencies and donors warned the situation had “reached a breaking point” triggered by the threat by the Houthi aid body to impose a 2 per cent tax on international assistance. The agencies flatly rejected this demand, saying they could not use donor funds to benefit one side in the conflict.

The agencies and donors warned that aid would be scaled down or suspended in areas under Houthi control where there was interference with deliveries. Although the Houthis promptly dropped the tax, they and, to a lesser extent, pro-government forces stand accused of impeding deliveries and diverting food and medical assistance to fighters and others, depriving civilians already suffering starvation.

The Armed Conflict Location and Event Data project (Acled), which tracks confirmed fatalities in Yemen, has estimated that more than 100,000 people have been killed in the war there. Acled has reported that 67 per cent of 12,000 civilian deaths have been caused by Saudi-led coalition airstrikes. Aid agencies have estimated that 85,000 Yemeni civilians have died from hunger and disease.

Another minuscule breakthrough occurred recently during back-channel talks in Oman between Saudis and Houthis. The Saudis agreed to reopen for limited medical flights the Houthi-held international airport at Sanaa, the capital. The airport has been closed by the Saudi air force since 2016.

So far, two UN aircraft have flown from Sanaa to Amman in Jordan where seriously ill Yemenis are receiving treatment not available in Yemen.