Hizbullah could intervene in Syria to prop up Assad, says leader 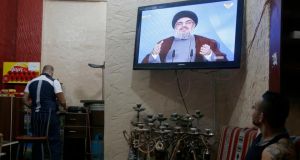 Hizbullah, the Lebanon-based and Iranian-backed Shia Muslim organisation regarded as terrorist by several western countries, will not allow the Assad regime in Syria to collapse, according to one of its leaders.

He was responding to suggestions that the US, Britain, or France might intervene militarily if allegations are proven that the government has used chemical weapons in the conflict.

“Syria has real friends in the region and the world that would not let Syria fall into the hands of America, Israel or Taqfiri [fundamentalist Sunni jihadi] groups,” he said. “Details will come later. I say this based on information . . . rather than wishful thinking.”

Russian ambassador to Lebanon Alexander Zasypkin appeared to confirm his assertion that Russia could also intervene. He said Moscow “could not prevent foreign intervention in Yugoslavia and the occupation of Iraq, but things are different now. Russia will not accept any foreign assault on Syria.”


‘Non-lethal aid’
Sayyed Nasrallah’s comments coincided with rising pressure on US president Barack Obama to go beyond his policy of offering “non-lethal” aid and limited training to certain rebel groups.

While unwilling to intervene directly, he has also been reluctant to supply arms to rebels due to the strong presence among them of al-Qaeda-linked Jabhat al-Nusra and other Taqfiri factions.

In recent months Hizbullah has deployed guerrillas in Lebanese-populated villages located on the Syrian side of the border in the countryside around the strategic town of Qusayr, the site of clashes between rebel and government forces.

Hizbullah fighters have been sent to the shrine of Zayyida Zeinab in an eastern suburb of Damascus where thousands of Shias live. He said attacks on this shrine by Taqfiris “will have very dangerous repercussions”.

He warned that “what is happening in Syria concerns all of us [Lebanese], Muslims and Christians, the state and the government. All who have ties with Arab and foreign states should tell them: the war should stop.”


Deter aggression
Lebanon has already suffered major spill-over from the Syrian conflict. On the political front, pro-rebel Sunni politicians have renewed pressure on Hizbullah to disarm its military wing which, the movement insists, must be maintained to protect Lebanon since the small army is unable to deter aggression or defend the country.

The formation of a new Lebanese “national unity” government has stalled over Hizbullah’s insistence on a veto on policies.

On the military front, pro-rebel mainstream Sunni politicians have funnelled arms and aid across the frontier while radical Salafis have joined the fight against the government.

Troops have been called away from Lebanon’s southern border with Israel to secure the Syrian frontier and the northern port city of Tripoli where there have been sporadic clashes between pro-rebel Sunnis and pro-regime Alawites, who belong to a Shia off-shoot sect. UN peacekeepers have had to patrol without army participation, creating tension with local villagers.

Concerned over the possibility of Israeli military action, Hizbullah has, apparently, restored some of its bunkers and other military facilities in the south, abandoned when UN troops deployed after Israel’s 2006 war on Lebanon.

Hizbullah has reasons to fear the rise in Syria and Lebanon of Taqfiris who seek to crush the movement.

It is also concerned that a US-aligned Sunni fundamentalist regime in Damascus could conclude a peace deal with Israel.

1 UK to close borders to non-English speakers and unskilled workers
2 New Sinn Féin TD apologises for ‘glib, off-the-cuff tweets’
3 Draining the swamp? Trump in spree of clemency for rich white men
4 A Russian cruiser with ‘cannibal rats’: What other ‘ghost ships’ could be out there?
5 Jump in young Irish adults living with parents among highest in EU
Real news has value SUBSCRIBE