From pariah to martyr after violent death in Kabul 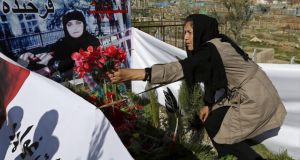 A member of an Afghan women’s rights activist group puts flowers on the grave of Farkhunda, the 27-year-old woman who was beaten with sticks and set on fire by a crowd of men in central Kabul. She is now being treated as a martyr. Photograph: Mohammad Ismail/Reuters 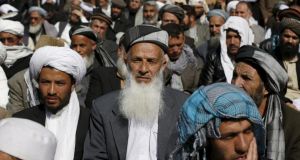 Afghan Islamic clerics gather during a protest in Kabul on March 26th to condemn the killing of Farkhunda. The lynching of the woman by a mob in the Afghan capital has continued to fuel public anger. Photograph: Omar Sobhani/Reuters

In indignant tones, the Islamic law student told her family about the superstitious practices she had witnessed earlier that day at a historic shrine in Kabul. She had seen illiterate mullahs sell good-luck charms and visitors who were convinced that prayers offered in the shrine were bound to come true.

Over a family dinner, the student, a 27-year-old woman named Farkhunda, vowed to return and speak out against what she deemed superstitious and un-Islamic behavior. That decision – and what awaited her at the shrine – has convulsed Kabul. When she returned there last week and began chastising people for their ignorance, an attendant at the shrine countered with a far more dangerous accusation: This woman, he shouted, was an infidel who had burned the Koran.

A sparse crowd quickly became a mob of hundreds, and the men railed at her, beat her and set fire to her body.

In little over a week since then, Farkhunda has been transformed from a woman so despised that officials had defended her lynching, into a celebrated martyr. And more, she has emerged as the rarest of Afghan figures: a female religious champion who ventured into a shrine to preach Islam and was felled by ignorant men.

“Farkhunda was a true Muslim, a religious hero,” said Shahla Farid, a law lecturer at Kabul University and a member of a commission appointed by the Afghan president to investigate Farkhunda’s death. “Here a woman challenged a man and defended Islam.”

The shrine attendant who falsely accused her of burning the Koran now sits in jail, as do more than two dozen other men accused of a role in her death, which was captured in numerous cellphone videos. There are growing calls for the public executions of those responsible.

Banners depicting Farkhunda’s face grace the spot where she was killed. And her family, first told to flee the capital for their own safety, has proudly taken her name as their surname. The country’s Religious Affairs Ministry has pledged to rid shrines of fortune tellers and peddlers of good-luck charms, whom Farkhunda was preaching against when the crowd turned on her.

Although Farkhunda found recognition after her death, it is telling that, in life, she was silenced when she spoke out. After more than a decade of efforts to improve the standing of Afghan women, violence against them occurs across much of the country with impunity. A man’s accusation against a woman is often the final word, as it was here last week.

For some women in Kabul, the despair and terror they felt upon watching Facebook videos of the lynching have given way to a cautious hope. “She has improved the status of women in Islam and in our community,” Farid said. “I believe Farkhunda is now giving more hope to more women.”

But Farid allowed that her female students were less optimistic. When a new school year opened this past week, only two of the 30 enrolled female students appeared for her class; male attendance was better. Usually, she said, it is the opposite when the school year begins: Female students, who are more isolated, show up for the first lectures, while the male students skip class to hang out.

Then she heard from female students who said they were afraid to be in public after watching how quickly the mob had formed against Farkhunda. “How can I sit here in class with boys? I’m afraid of them,” Farid said, recounting what students told her.

And some women say that focusing on Farkhunda’s vindication in death, rather than her victimisation in life, is to miss the point. “This is heartbreaking – she was innocent and she was a woman,” said Fawzia Koofi, a women’s rights activist and politician who is also on the presidential fact-finding commission into Farkhunda’s death. “This happened to her because of her gender.”

Many were struck that Farkhunda died in downtown Kabul, a city with a large police force, and in broad daylight. Many of her assailants were young men, some teenagers, with little education or employment. Khaled Hosseini, the Afghan-American novelist of The Kite Runner, wrote on Facebook that among the many things that left him depressed about Farkhunda’s death was “that the attack did not happen in, say, a remote conservative village in southern Afghanistan but in Kabul, an urban city embodying what passes for progressive thought in Afghanistan.”

Farkhunda herself came from an educated family, her father an engineer and her mother a high school graduate, said her brother, Mujibullah, who has taken his sister’s name as his surname. She had studied maths at a university before switching to Islamic studies at a madrasa.

While her parents initially told reporters that Farkhunda was mentally ill, her brother said they did so only at the behest of the police, who thought it would defuse tensions. Mujibullah insists that his sister was of sound mind. The police, as well as some members of the president’s investigative commission, maintain that Farkhunda was under treatment by a doctor for depression or another disorder. Mujibullah said that Farkhunda first went to the shrine – known as the Shrine of the King of Two Swords and said to be where an early Islamic conqueror in Afghanistan had died fighting Hindus – out of generosity, to bring clothing to the needy.

But she was appalled at what she saw as heretical or superstitious practices there, and she ranted about them at dinner that night, vowing to return, her brother said. When she went back to the shrine on March 19th, she preached in the courtyard for hours, warning visitors away, urging them to pray at the mosque across the street. She denounced the attendants who cleaned the shrine – some of whom sold charms – as “two-rupee beggars.”

Later, one of the shrine attendants, Zain-ul-Din, levelled his accusation against Farkhunda. He may have even produced charred pages from somewhere, declaring them to be pages of a Koran she had burned. A deputy minister for religious affairs, Dai-ul-Haq Abid, said his investigation had clearly established Farkhunda’s innocence.

( The morning after Farkhunda’s death, he went to the shrine to confront Zain-ul-Din. “Why did you accuse this woman of burning the holy Koran?” Abid recalled asking. The old man complained that Farkhunda had been driving people away. When Abid asked again, the old man struggled to answer. Abid recalled that the man looked down in shame before answering that he was full of regret. Abid said that the shrine attendants were clearing “hundreds of thousands of rupees a month” selling good-luck charms. “This is a business,” he said, one that Farkhunda had threatened. Now, he said, the authorities have begun arresting people who peddle such charms at shrines.