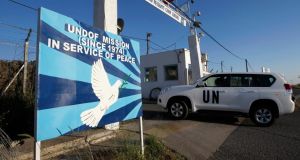 A United Nations armoured car drives through a gate at a UN base near the Kuneitra border crossing between Israel and Syria, in the Israeli-occupied Golan Heights yesterday. Syrian rebels said they were holding a group of Filipino UN peacekeepers on the ceasefire line between Syria and the Israeli-occupied Golan Heights after clashes in the area had put them in danger. Photograph: Reuters/Baz Ratner

Syrian rebels claimed yesterday to be holding four Filipino UN peacekeepers on the ceasefire line between Syria and the Israeli-occupied Golan Heights after clashes had put them in danger.

UN secretary-general Ban Ki-moon strongly condemned the detention and called for the peacekeepers’ immediate release. They were detained as they patrolled close to an area where 21 Filipino observers were held for three days in March.

The Yarmouk Martyrs Brigade made the announcement on its Facebook page, in a statement accompanied by a picture of four peacekeepers wearing light-blue UN flak jackets marked “Philippines”.

The same group was responsible for the March incident and initial reports described it as hostage-taking, which the rebel unit denied. “The brigade does not want this issue blown out of proportion like the last incident,” said Abu Iyas al-Hourani, a rebel who spoke on Skype.

“They [the peacekeepers] are safe and sound and will be handed over as soon as possible. But as happened last time, they were in an area where very heavy clashes took place in the Ghadeer al-Bustan area.”

Syria’s two-year uprising has increasingly seeped into sensitive frontiers, threatening to draw other countries closer to a conflict that has killed more than 70,000 people in Syria.


Area of separation
UN spokeswoman Josephine Guerrero said the peacekeepers were taken at Position 86, near the southern end of the narrow “area of separation” between Syrian and Israeli forces.

Mr Hourani said his group feared it would be blamed for the deaths of members of UN forces if any were killed during fighting between President Bashar al-Assad’s forces and rebels.

Meanwhile, Turkish prime minister Tayyip Erdogan condemned Israeli air strikes on targets near Damascus, saying they were an opportunity for Mr Assad’s government to cover up its own killings.

“The air strike Israel carried out on Damascus is completely unacceptable. There is no rationale, no pretext that can excuse this operation,“ Mr Erdogan told a parliamentary meeting of his ruling party.

“These attacks are chances, opportunities offered on a golden tray to Assad and to the illegitimate Syrian regime. Using the Israel attack as an excuse, he is trying to cover up the genocide in Banias,” he said. Mr Erdogan was referring to a Syrian coastal town where anti-Assad activists said at least 62 people were killed by government fighters over the weekend.

Israeli officials said the air strikes on Friday and Sunday were not intended to influence its neighbour’s civil war but only at stopping Iranian missiles from reaching Lebanese Hizbullah militants for possible use against the Jewish state.

Iran’s UN ambassador, Mohammad Khazaee, complained to the UN about the air strikes, describing them as “provocative and unwarranted attacks”.

Lebanon, which borders both Israel and Syria, has also condemned the air strikes and called on the UN Security Council to condemn violations of its air space by Israel. – (Reuters)